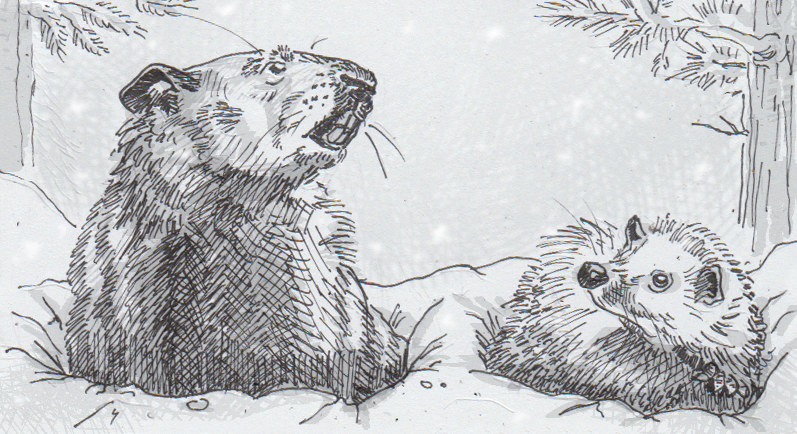 Guessing the weather, with or without a groundhog

Groundhog Day has deeper roots than you realize, although none of them really make the basic premise of a woodland creature acting as a meteorologist for 15 seconds a year any more logical.  While the name suggests that the day really hinges on groundhogs, they’re actually a convenient substitute adopted by German immigrants in the 1800s who were unable to reliably get their weather from their Old World prognosticating animals. And really, the animals were kind of incidental to the candles anyway.

To give groundhogs (Marmota monax) their fair shake, they do really hibernate for the winter, making them an appropriate animal to tie some of this mythology to. As one of the few “true hibernators,” they usually dig out specialized dens deep enough in the ground to be less affected by changing temperatures above ground. This way, they can truly lower their metabolism through a lower body temperature and heart rate without concerns about the weather. Waking up in February (in Pennsylvania) isn’t so much because they’re looking for their shadows as much as they’re just ready to start eating and looking for a mate for the spring.

Any burrowing hog will do

In the end, the motivations behind a groundhog’s internal clock aren’t terribly important, because they aren’t directly tied to the origins of the “shadow” traditions anyway. The idea that an animal would emerge from its burrow in February was brought to Pennsylvania by German immigrants, who had previously looked to hedgehogs at this time of year, and now needed an available stand-in in their new home. Hedgehogs also lower their body temperatures for winter slumber, but probably aren’t all that interested in their shadows either. The Germans had only been put on this idea when Roman legions had invaded and told people to look for animals to be ending their hibernation. This loose tie to ground or hedgehogs isn’t really a deal-breaker though, because the issue of the portending the seasons in February didn’t always involve any burrowing animals in the first place.

February 2nd is also the Christian holiday of Candlemas. Across western Europe, it was, among other things, a day when the clergy would bless and distribute candles to help people deal with the continuing winter. In trying to gauge how much more winter would need to be endured, various songs and rhymes advised that a sunnier Candlemas would mean longer winters. Maybe conditions were actually warmer on cloudy days where humidity could retain a bit of heat, versus clear but cold conditions (that would also make shadows visible to various burrowing animals.)

Finally, it of course needs to be said that predicting six additional weeks of winter from February 2nd puts you in the middle of March, which coincides nicely with the vernal equinox and beginning of spring anyway. For this reason, farmers generally looked at Groundhog Day as a milestone for still needing half of their hay available to livestock, lest they run out too early. The other major milestone based around this date is of course the movie Groundhog Day, which is good enough to make all of the aforementioned confusion worth it.