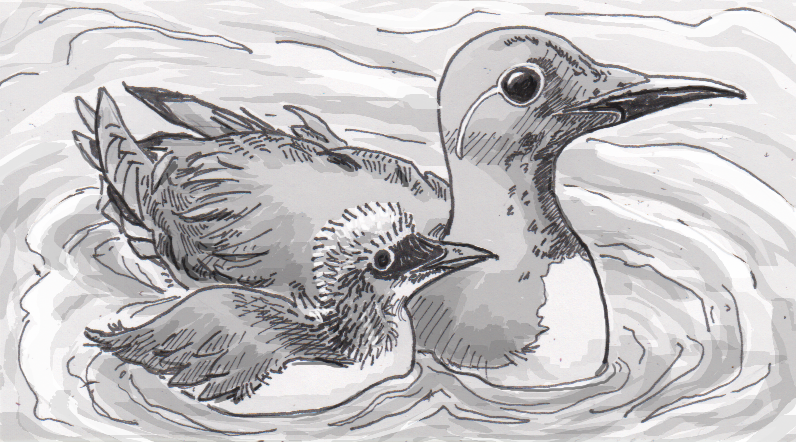 It’s very hard to judge parenting strategies at a glance. Before I had kids, I vowed that my kids would never eat junk food ever, only to have my children’s fickle appetites prove me wrong within the first two years of their lives. Looking across the animal kingdom, there’s a huge range of how parents do or don’t interact with their kids, and what may seem very counterintuitive actually turns out to work quite well for the survival of a species. One example is how guillemots, also known as murres, push their chicks to leap off the cliffs where they were born to live in the sea, all at an age before the tiny birds can fly by themselves.

A rock and a wet place

Guillemots (Uria aalge) are a family of sea birds that live near the Arctic circle. They can fly quickly, but even adults maneuver better in the water than in the air. To find food, the birds will dive into the cold sea, sometimes reaching depths of up to 590 feet underwater. These dives are needed to catch the cod, herring and other schooling fish guillemots live off of. However, that vigorous hunting still isn’t an option for a three-week-old chick with no flight feathers, which is why when the birds leave home, their dads go with them to keep them fed.

Even with a parental escort, researchers have long wondered why guillemots bother with this seemingly dangerous practice. Nests are built on high, rocky cliffs to isolate the birds from predators while still being accessible to flying parents. For flightless chicks though, this means leaping with immature wings over hazardous rocks, seemingly for little benefit, since parental assistance would be needed either in the nest or in the ocean.

To better understand the potential upside of this behavior, specialized trackers gathered more detailed data on a few families of birds. It turned out that the nests were not pinnacles of security after all, and morality rates of chicks in the water were similar to the chicks that hadn’t left home yet. What was different was the growth rate of the chicks. Out in the ocean, researchers found that fathers spent as many as six hours a day underwater to fetch food for their offspring. Over the course of five to seven weeks, this uninterrupted feeding schedule boosted the growth rate of chicks at sea, giving them an advantage over chicks waiting around in their nests.

The other beneficiary of these doting dads was the chicks’ mothers. Once the baby left the nest, mother guillemots were able to relax a bit, only hunting for food one to two hours a day after weeks of resource intensive labor. They could also find new potential mates in case the father of their current chick was unavailable in the next summer. From a mammalian perspective, this care-giving role reversal may seem odd, but for birds living near the Arctic where summers are short, being efficient with one’s time is critical if you want your family to be successful.

Source: Why guillemot chicks leap from the nest before they can fly, Scienmag