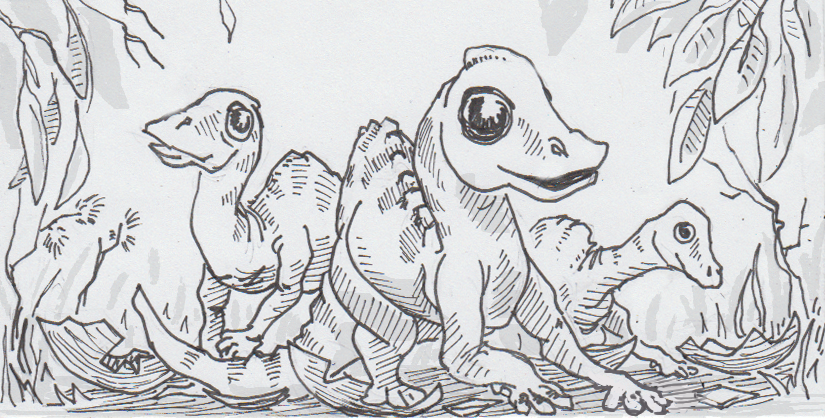 You don’t normally describe 65-million-year-old slabs of rock as a ‘bundle of joy,’ but when that slab contains the remains of three to four infant dinosaurs, it makes sense. The slab also contains the tiny hadrosaurs’ eggs, which allows for some conclusive analysis in tying shell fragments to a specific species, in this case Saurolophus angustirostris. It’s unclear if the babies had actually hatched before death, but their state of development also sheds light on dinosaur growth curves. Unfortunately, the data we can glean from these fossilized siblings carries some unusual limits, thanks to the slab having been poached from its original location without being properly documented first.

While the exact point of origin isn’t know, we do know the babies came from an area in the Gobi Desert called the Dragon’s Tomb. The area is rich with fossils, which was useful in providing other specimens of young and adult duck billed dinosaurs to compare the babies to. No perfect match could be made though, as dinosaur morphology changed a lot as they grew. Like a modern bird, these baby S. angustirostris had large eyes and small mouths, to the point where their tell-tale “duck bills” were merely nubs. They were also missing the species’ distinct crest tube, indicating that it was a structure that grew as the animal matured into adulthood. In addition to all these morphological changes, baby hadrosaurs simply had a lot of growing to do; while adults S. angustirostris topped out at 40 feet long, these babies were hatching at just around a foot in length.

While paleontologists can speculate that the area where the babies were found was likely the shoreline along a river, the poachers that originally removed the slab made that impossible to pin down. After it was extracted, the slab was illegally traded to a collector in Japan, who then sold it to someone in Europe. It eventually found its way to the Royal Belgian Institute of Natural Sciences, at which point it could actually be studied. At this point, the slab has been properly returned to Mongolia for display in a museum. While this solves some legal and ethical issues, many questions will remain needlessly unanswered, such as the how the babies were buried, if any possible parents were also nearby, and more.