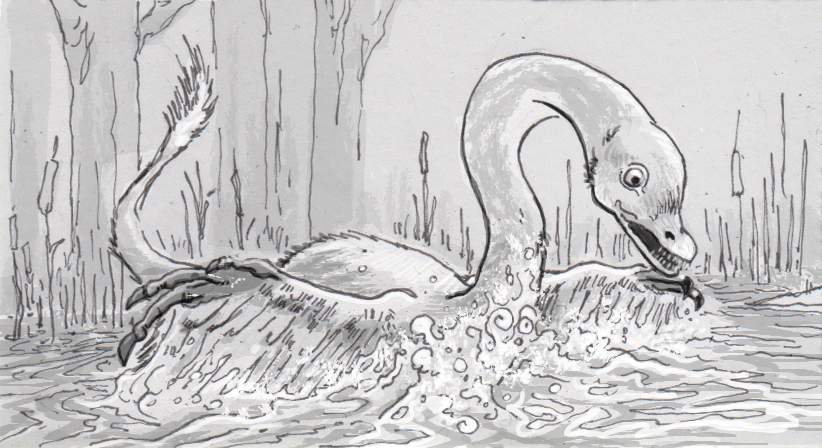 It wouldn’t really do Halszkaraptor escuilliei justice to say the newly described dinosaur “broke the mold,” because this unusual animal seems to have been the product of three or four molds mashed together. While technically a theropod dinosaur, like Tyrannosaurus or Velociraptor, H. escuilliei followed very few of the anatomical conventions laid out by its relatives. Instead, the resident of what is now Mongolia sported features only seen on more modern relatives, like the neck of a swan, or the upright posture of a duck. The overall package was so unusual that paleontologists studying H. escuilliei‘s fossils weren’t even sure it was a legitimate specimen when it was first presented to them.

Paleontologists usually find fossils themselves, either in the field or at least in a museum’s archives. Appropriately for such a weird species, H. escuilliei was handed over to researchers at the Royal Belgian Institute of Natural Sciences after it was purchased from smugglers on the black market, with the eventual goal of repatriating it to Mongolia. This sordid history, plus the strange mix of anatomy, necessitated extra scrutiny to make sure the 15-inch block of stone contained fossils from one animal, as fossil poachers will sometimes glue fossils together to basically fabricate a more exciting specimen. Since H. escuilliei already looked like a mix of at least two to three animals, researchers felt it warranted a trip to the European Synchroton Radiation Facility (ESRF).

Using the multi-resolution tomographic scanning, researchers were able to comb over every inch of the fossils and rock that contained the specimen. Rather than finding suspicious cracks and glue, the high-energy x-rays from the synchroton showed that the bones were consistent in their composition throughout the skeleton. This confirmed that the skeleton had not been altered by humans, and was simply exotic looking due to evolution.

The synchroton also allowed researchers to assemble a highly detailed, 3D digital model that let them examine details without damaging the rock or fossils in the process. Peering through the 3D structure, they found an unusual number of skinny teeth towards the front of H. escuilliei’s mouth. Scans also revealed spaces for a network of sensory nerves, reminiscent of a crocodile’s sensitive snout. The nostrils were located higher on the snout than most ancient theropods, placed in a location closer to where you’d find them on a modern duck. Finally, the head was noted for being especially triangular overall, all of which seemed to indicate that H. escuilliei wasn’t running down food on land like its kin, but was instead snatching fish from the water.

Imagining H. escuilliei moving through the water was a little weirder than figuring out how it fed. The dinosaur had an elongated, flexible neck which has been compared to a swan’s. However, the arms certainly didn’t allow for flight like many waterfowl today, and they weren’t quite as specialized as a penguin’s flippers either. The fingers were elongated differently than other ancient theropods, instead looking like the shape of a bird like a murre. Researchers suspect that these forelimbs were used like paddles in the water, although without more information about the shoulders, it’s hard to know how well they could really move. At the very least, the feet and legs don’t match the efficient webbed feet found on a modern duck or goose, instead being more suited for simply walking around on land.

Aquatic but kind of awkward

The overall impression of H. escuilliei seems to be a jack-of-all-trades, and master of none. The dinosaur was at least partially equipped for the water, but not completely committed to it to the degree modern shorebirds are. The small predator could walk around on land, but probably collected most of its food paddling around lakes or swamps. This may indicate that H. escuilliei’s environment was in a state of flux, and that the water it preferred wasn’t always available. As a result, it still had to be ready to walk to the next pond to look for more fish.

Finally, the last weird thing about this dinosaur is that it’s weird at all. Mammals can be found in the air, in trees, underground, and in the oceans. Dinosaurs came in all shapes and sizes, ruling the Earth for millions of years, but somehow skipped going for a swim in all that time. We don’t find many theropods in the shape of H. escuilliei, but this creature’s existence begs the question as to why that is. Are more aquatic species still waiting to be discovered, or did dinosaurs have some other reason to avoid committing to living on the water?

Source: Apparently This Is What a Swimming Dinosaur Looks Like by Ed Yong, The Atlantic