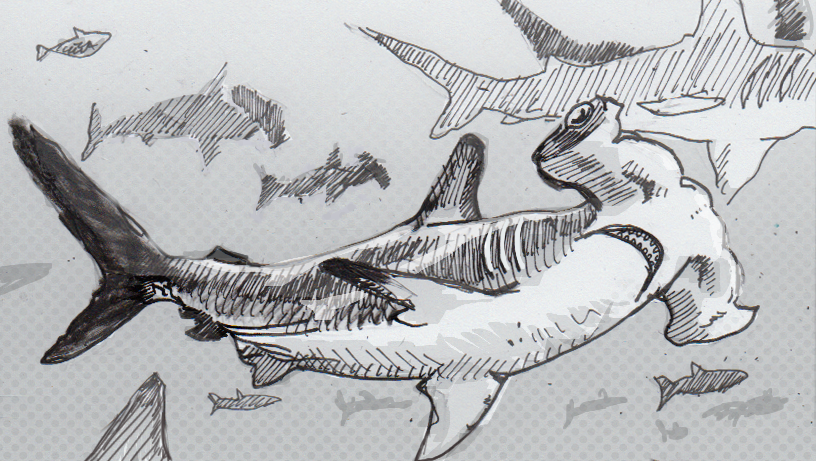 With a name like Hammerheads, you might overlook the fact that this family of sharks represents the cutting edge of oceanic predators. While the unusual head shape and eye placement of these fish may seem awkward, that signature skull is actually the latest development in shark evolution, providing a number of advantages like maneuverability and potential gains in cognition. Here’s a quick tour of what makes these cephalofoil sharks such effective hunters.

The cephalofoil name helps explain the maneuverability of these sharks. With the wing-shaped heads on these animals, they’ve been noted at being especially quick and agile swimmers. They’ve been observed frequently making quick, snappy turns, moving twice as fast as non-hammerheads like a sandbar shark. The wing-shape seems to act like the spoiler on a race car, helping them maintain control while moving at speed.

The heads also carry an array of sensors. Eyes, nostrils and electrosensory pores aren’t exclusive to hammerhead sharks, of course, but their placement on these wide heads does seem to accentuate their effectiveness. The wider spacing of the eyes may be improving the depth-perception from their binocular vision. The wider placement of nostrils seem to offer greater accuracy when locating the source and direction of smells. Finally, the bottom of the “winged” head carries a high concentration of electrosensory pores, letting the whole head sweep large spaces for potential prey, like a metal detector for fish.

This large amount of sensory information requires a big(ish) brain to make sense of it all, which may have become a benefit unto itself. Scallop hammerheads (Sphyrna lewini) in particular exhibit relatively large brain sizes, which may contribute towards this shark’s social behavior, moving in huge schools of hundreds of sharks at a time. The schools will migrate over large distances together, with participants possibly communicating through body language.

This isn’t to say that these sharks are strictly sophisticated, sensitive works of hydrodynamic evolution. They’ve also shown they’re still deserving of the name “hammerhead,” using their head to bludgeon and restrain prey. Great hammerhead sharks (Sphyrna mokarran) have been observed using their head much more like a blunt tool, pinning stingrays to the sea floor until they could restrict their prey’s movement with their mouths more directly. Such versatility may be their one of their most useful traits of all.

Source: Why do hammerhead sharks look like that? by Henry Nicholls, BBC Earth