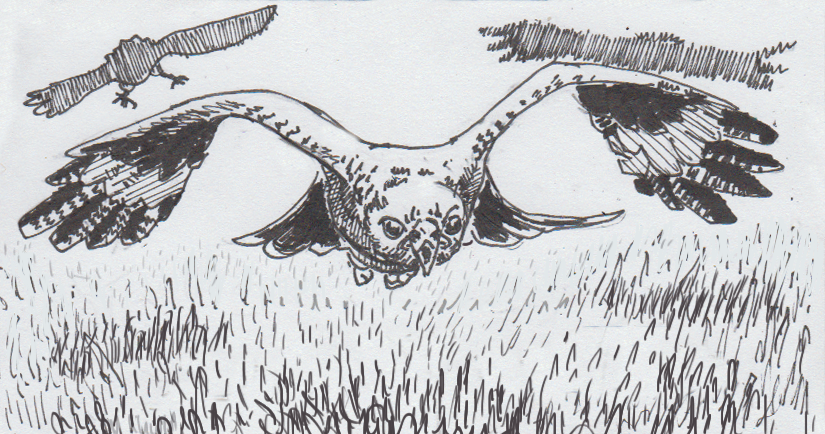 Many species of animals live and work in groups. Herds of deer, zebras, etc. will move and graze together, relying on each other to keep watch for predators, and then add to the chaos that will hopefully result in a successful escape should danger arrive. There’s not a lot of clear cooperation in these behaviors though, much less what you’d call coordination. For that, you might need to look to Harris hawks (Parabuteo unicinctus), who have been seen not only coordinating with each other, but also relying on specialization and basic divisions of labor to make sure they get the most out of each hunt.

Harris hawks in the southern United States have been observed using a variety of techniques in group hunts. They start by scouting for prey, with the hawks standing on each other’s backs in stacks of two to three birds, maximizing their view of their surroundings. Hawks with better vision seem to become the group’s designated spotter, while the others wait at the ready to provide support.

When prey is found, the hawks let the bird who found the rabbit or mouse take the lead unobstructed. The next two birds act as wingmen, ready to pick up the trail if the prey dives left or right, or if the first bird misses their initial strike. They can cycle through each member of the hunting party, minimizing the amount of breathing room for their target.

If the target does find shelter, they team jumps into new roles on the ground. Some hawks will attack bushes to flush prey out towards their teammates. If the target gets as far as burrow, one hawk might guard the burrow’s entrance, blocking it with their clawed feet while others pursue other openings.

In each phase of the hunt, the nearly every hawk likely giving up the chance to make the kill themselves, and thus risking their next meal. The benefits of working together seem to outweigh this concern though, as they share their kills with each other, making the coordination worth it to each member of the team. It’s thought that the abundance of cover, in the form of shrubs, bushes and burrows, make this strategy worth it to the hawks. Working together must net more food on a regular basis than occasional feasts alone.

The origins of these sophisticated methods is the next focus of study. Harris hawks roost together, and researchers would like to figure out of cohabitation led to coordinated hunting, or the other way around. They plan to study other populations of Harris hawks in South America, looking for similar behavior patterns in their hunting. If these skills are somehow limited to the birds in the United States, the question of a local culture comes into play, as these advanced techniques might be taught rather than innate.

Source: Zoologger: The only raptor known to hunt in cooperative packs by Joshua Sokol, New Scientist