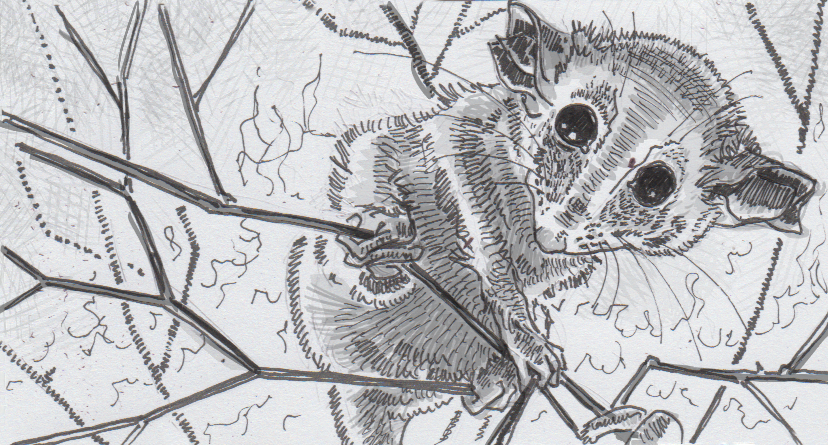 Pygmy-possums are small, nocturnal omnivores native to Australia and Indonesia. They spend most of the time climbing and jumping through trees, and can even use their prehensile tails like a rope to reach higher branches. This arboreal mobility is great for catching bugs, searching for food, and getting out of trouble. The catch is just that the possums need to be awake when danger arrives to actually do something about it.

One threat in particular is fire. Like many parts of the world, Australia is prone to wildfires when summer brings hot, drying weather to the continent. To mitigate the risk from these wildfires, forestry services conduct controlled, preventative fires in the winter in order to remove excess brush that is likely to act as fuel for fires that break out in the summer. This would be fine, except that the pygmy-possums tend to not only live, but hibernate in hollowed out trees and abandoned bird nests during the winter, meaning that these artificial, off-season fires may put the possums in unexpected danger.

To confirm the pygmy-possums’ vulnerability to controlled burns, five members of the species Cercartetus nanus were brought to a lab while in a state of torpor, or hibernation. When experiencing torpor, the possums slow down just about all metabolic activity, barely moving, not needing to eat and even lowering their body temperatures. They usually reserve these periods of metabolic-hiatus for winter months when food is more scarce, but some have been known to stay zonked out during warm months too, which meant that the member of Cercartetus have possibly had some experience with sleeping through a summer fire, hopefully developing a reaction to it.

When is it too hot to sleep?

In the lab, the hibernating possums were monitored while exposed to smells of smoke and rising temperatures. They seemed to detect the smoke while slumbering, but the changes in temperature is what proved critical to their reaction time. When ambient temperatures reached 59° Fahrenheit, male pygmy-possums started waking up enough to move themselves around (probably wondering where they were.) Female possums weren’t quite so motivated at that temperature, but when things hit 75°, they were all up and about, even able to pull off their signature tail-climbing stunts. Even if they were awake, if their bodies were still cold, they just couldn’t do much but stagger around like a human in desperate need of their first cup of coffee.

Overall, these results are promising, and can help inform future controlled burn policies. While it still makes sense to start fires in cooler months so the fires are easier to control, the researchers recommend that those burns not be started when things are downright chilly. When it’s too cold, hibernating animals like the pygmy-possums are less likely to wake and respond in an useful way until the fire is right on top of them. Moderate dates should allow the heat and smell to wake them up with enough time to hop and climb to safety.

Source: Hibernating pygmy-possums can sense danger even while dormant by Joan Robinson, Scienmag