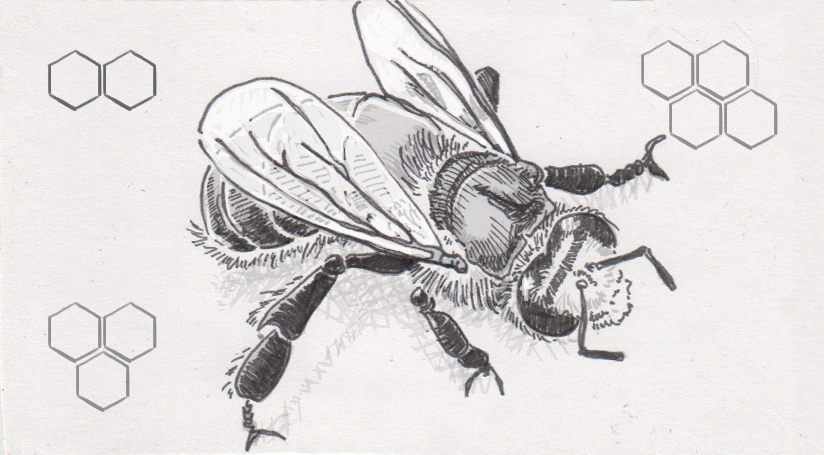 Honeybees can compare quantities from four down to zero

As bees fly through an area to look for nectar, they’re not just listening to their stomachs. Like a good explorer, they’re taking mental notes about where to find the best food supplies so that they can share the good news with the rest of the hive. Their assessments may be more than abstract judgments too, as honeybees have been found to be able to compare specific quantities between one and four. This allows bees to effectively count up to four flowers, on par with the capabilities of most dogs. New research has found that bees can take one big step further though, as they can also understand zero.

To test how well bees could count, they were first trained to seek out smaller quantities. Images of different numbers of shapes were displayed at two feeding stations, with the lower number of shapes always being paired with a tasty sugar-solution. Higher numbers were paired with quinine to reinforce the pattern more quickly, and bees regularly flew to the correct, smaller quantity at least 80 percent of the time. What’s more, they were able to correctly compare quantities when the winning option showed no shapes. This may seem obvious, but understanding that “no shapes” is a quantity that can compared is a feat only seen in humans, chimpanzees and monkeys, all of whom have a lot more brain to work with than a tiny bee.

Few can make note of nothing

Understanding that zero is less than one may seem obvious, but that’s largely because you’re used to the idea that zero is a number. Zero wasn’t really recognized as a number until the fifth century A.D. in India, and managed to elude Europeans until the year 1200. Mayans also came up with zero in the first few centuries A.D., but it wasn’t innately part of human mathematics. This doesn’t mean that our honeybees are on the verge of working out multiplication or negative numbers (negative flower counts?), but it does shake our understanding of what kind of brain is necessary to handle a quantity of none.

At this point, it’s also not clear what bees might be counting. Keeping tabs on flower counts may be an option, although it may also be useful for tracking the dances bees perform to communicate their discoveries to each other. We know that bee brains can handle these operations, but figuring when they employ these math skills may be much harder.

My four-year-old asked: Why does zero matter?

This is a tough question to answer for someone still working on counting to 12. To start, it makes dealing with large numbers much easier, as we don’t need as many unique digits. We don’t need a character for ten because we can use 1 and a 0. Zero has also allowed us to deal with numbers less than one, including decimal fractions and negative numbers. It’s also critical for… oh wait, four-year-old.

Zero helps keep track of when something is expected or possible, but is also missing. Zero lets us keep track of amounts smaller than one, as well as work with much bigger numbers more easily. We’ll come back to this in a few years maybe…