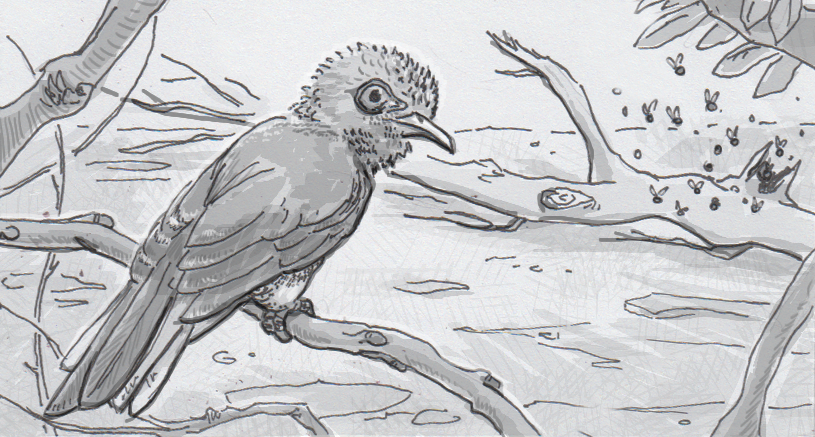 In various parts of Africa, the trick to finding honey isn’t looking for bees, but talking to birds. Not just any vulture or swallow will do, of course, because they won’t know what you’re talking about. The aptly-named greater honeyguides, on the other hand, will happily lead people to bee hives, assuming those people know exactly how to ask.

Honeyguides are small birds native to Africa and Asia, with plumage ranging from grey to yellow. They might easily be confused with many other small birds, except that they live primarily on beeswax for food. They might toss in a few bugs or fruit along the way, but their preferred food is the beehives nested among old trees, rocky crevices or other natural formations throughout the landscape. This can mean some potential meals are hard to reach, which is why honeyguides in the genus Prodotiscus have learned to enlist some human help.

Helping us help them

The birds have developed an amazing, mutualistic relationship with honey-hunting humans. When working together, the birds will flit and flutter in close range of a human, tweeting and leading like an animal in a Disney cartoon. Bit by bit, they lead the human to a bee colony so that he or she can use smoke and axes to calm the bees and split their home open. The human then claims the honey, while the bird gets easy access to the waxy honeycombs.

While many animals have developed relationships where they can help each other, what’s striking about the honeyguides is the degree of communication involved, and that that communication can’t be fully explained. In Mozambique, honey hunters have a distinct call to attract honeyguides, making a sort of growling grunt for them. The birds know this sound, and will guide people using that call two-thirds of the time, versus the one-third success rate of people mating random sounds. Importantly, while humans can teach each other the correct call for these birds, the honeyguides aren’t trained by people at any point. They’re still wild birds, with no selective breeding or instructions.

This would get many people thinking that the birds’ response to the “brr-grunt” sound is just part of their species’ breeding, and that humans are simply triggering some age-old instinct. That would make more sense if all honeyguides like the same call, but successful human calls vary by region from whistles to words. It would then make sense if the birds were being taught the local call by their parents, similar to the way songbirds share their tunes, except that honeyguides don’t really rear their young. They’re actually brood parasites, leaving their eggs to be raised by other species of birds. So if there is some cultural learning at play here, it’s somehow being shared between adult animals, which is a much more unusual scenario.

Untangling how this relationship, which has likely been happily flitting along for thousands of years, ever began will be difficult. At the very least, it depends on a few key advancements in both species, such as auditory processing, cultural learning, and of course the ability to harness fire and axes.