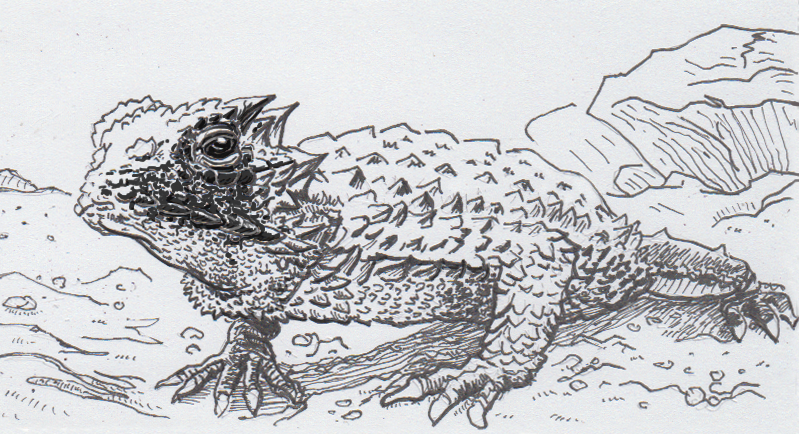 Horned lizards avoid being eaten by ejecting blood from their eyes

Bad blood and beyond

Even if we made permanent captives of the horned lizards (Phrynosoma), we probably would have been disappointing. It’s not that the squirting blood is in any way anticlimactic— the jet of blood that blasts out of specialized ocular sinus is bright red with a range of up to six feet. In the aftermath of a defensive bleeding, the lizards’ faces are often an unmistakable coat of red. The problem would have been the horned lizards are very strategic in how they employ this amazing ability, saving it for just the right moment, which probably would have never come up in the hands of some curious humans.

Horned lizards actually have a number of different ways to avoid being eaten, and the projectile bleeding is only one of them. When faced with a fast predator, like a whip snake, they’ll hold motionless, allowing their spines to help break up their silhouette and hopefully remain undetected. When avoiding a slower foe, like a rattlesnake, they’ll just run as fast as their small legs can take them. When those options don’t work and a confrontation is imminent, they’ll fan out their ribs to both look bigger and be harder to swallow whole. If that doesn’t make them less appealing, it may be the predator’s last meal— the horned lizard’s spines have been known to lodge the reptiles in the throats or stomachs of whoever ate them, killing both animals in the process.

Luckily for predatory mammals like coyotes or bobcats, the horned lizards repulsive blood is there to help them avoid such a fate. When these animals, or even your household dog, goes in for a bite, the lizards react by spraying blood, preferably into the attacker’s mouth. This is because the real trick of the blood isn’t the amazing visual, but a repulsive taste that likely comes from the venom of the harvester ants the lizards eat. That taste is somehow nasty enough to the average dog to force them to drop the lizard, salivate heavily and be generally miserable for up to 15 minutes. It’s enough time and distraction that the lizards should be able to escape, and may even convince the dog or coyote that just about anything else would make a better meal.

My second grader asked: What’s the blood taste like? What’s so gross about it?

We could try looking into the taste of harvester ants, but even the horned lizards need to coat them in mucus before ingesting them, so it’s probably an experience we’ll have to leave shrouded in mystery.

Source: If it has to, a horned lizard can shoot blood from its eyes by Sarah Hewitt, BBC Earth