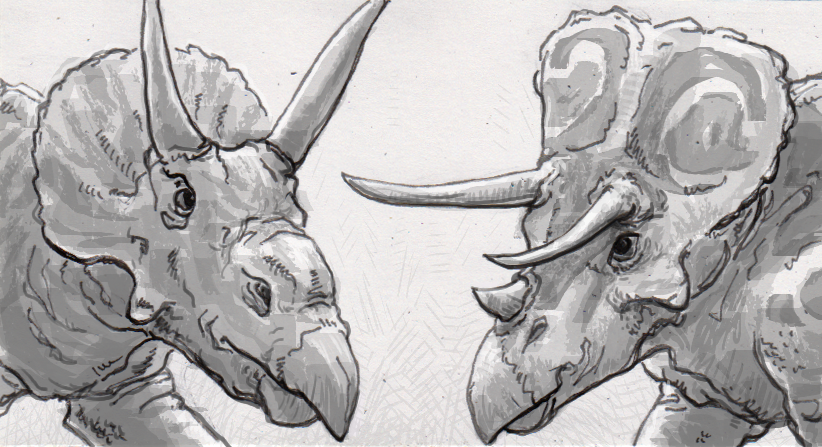 As far as anatomy goes, pointy things are almost always used for poking other animals. As a soft, relatively blunt human being, it’s hard to see spines, teeth or claws as being good for anything but stabbing and slicing. However, some of the world’s most impressive spikes, such as those extending from the face of a Triceratops, probably didn’t do much puncturing, and were instead grown for their visual appeal. With a lack of battle damage in fossils plus an impressive amount of variety in the headgear of each ceratopsian species, the question isn’t if horns were meant to be eye-catching, but exactly what message was being delivered.

Were spikes signs for other ceratopsians?

One possible explanation has been that each species’ unique combination of horns, knobs, spikes and frills helped them sort themselves out when mingling with other ceratopsians. A Triceratops, for instance, might have recognized that a Nedoceratops didn’t have the same horn proportions, and thus wasn’t worth trying to mate with. This would allow confused individuals to avoid hybrid offspring that would either be unviable or at least incapable of further reproduction.

New analysis of a spectrum of species has cast doubt on this idea though. After comparing anatomy from different locations and time periods, researcher found no evidence that the need to identify other species made any difference to these animals’ evolution. If looking different than other ceratopsians helped these dinosaurs reproduce more successfully, then you’d expect to see more differentiation between species that lived near each other. Instead, having other ceratopsians as neighbors didn’t result in fancier frills or horns. Those ornaments were apparently meant to draw a different kind of attention.

A more likely scenario is that horns and frills were meant to impress members of each dinosaur’s own species. Like antlers on a deer, large horns and frills would essentially advertise that a particular individual was healthy and strong, and probably worth mating with. While there’s no sign of (most) ceratopsians showing clear sexually dimorphic traits, like antlers that only grow on male deer, researchers still found patterns in the examined skulls to suggest that horns were meant to impress one another. The rate at which horns and frills evolved suggest that having the right headgear was a big mating advantage, and that that helped lead to the diversity of anatomy in these dinosaurs’ skulls.

That idea is based on the lack of battle damage we see in fossilized ceratopsian horns, as well as the crazy amount of anatomical variety seen between species. From that perspective, each dinosaur apparently wanted its own unique set of spikes to stand out, although recent analysis has found that that’s not actually the case.

Source: Dinosaur frills and horns did not evolve for species recognition by Queen Mary, University of London, Phys.org