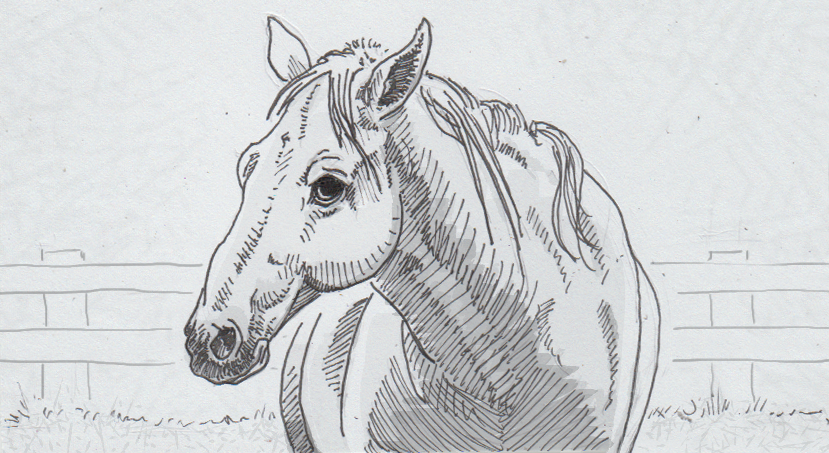 Horses eye our faces to identify angry or happy humans

One afternoon when I was thirteen, I found myself bouncing and falling off the back of a galloping horse, completely out of control. Between the tension in my posture and the stream of swear words coming out of my mouth, I’m sure that the horse I was on had no question about my emotional state. It seems that all the yelling and flailing may have actually been overkill, as domesticated horses (Equus ferus caballus) have been found to be responsive to much more subtle forms of communication with humans, including our facial expressions.

Having now completed more riding lessons since that disastrous afternoon, I’ve learned a host of cues that people can use to communicate with their horses. Everything from a tug on the reins to small adjustments in your hip movements can send signals to a horse, although they’re all messages designed for such communication and usually requiring at least some training on the part of both parties to be properly interpreted. Even when people seek their horses cooperation by adopting certain body language intended to mimic natural horse behavior, they’re still going out of their way for a horse-centric message.

It turns out that horses are also keep an eye on their riders when they’re not in the saddle. In addition to being responsive to our voices and body language, they can also read expressions on our faces. When shown photos of humans making either angry or happy faces, the horses’ heart-rate would go up, and they would turn to look with their left eye, engaging the emotion processing centers in the left hemisphere of the their brain. This reaction wasn’t unprecedented, and has been observed in another domesticated animal attentive to human concerns- our dogs.

There’s a chance that such reactions are learned by each horse, as the test subjects in this case were regularly handled by people. Previous work with dogs and emotion recognition found that the dogs sorted emotions more reliably on faces they were more familiar with, indicating that they’ve just learned some patterns to look for. On the other hand, noting specific facial features isn’t a huge stretch for a horse, as they have very good eyesight, outside of color blindness and a blind-spot directly in front of their head. They also use visual cues with each other for intra-herd communication, such as flattened ears, widened eyes and creased brows.

While this has some practical benefits to the horse, as domesticated animals we have a hand in the development of these traits. Animals that can read our faces will not only be easier to work with, but also make us feel like we share an emotional bond. Which of course doesn’t say great things about my relationship with the horse that dumped me in a wash years ago.

My first grader asked: They’re color blind? What colors do they see?

They can see two colors, a bit like someone with red-green color blindness. So anything red will end up being seen as just another shade of green.