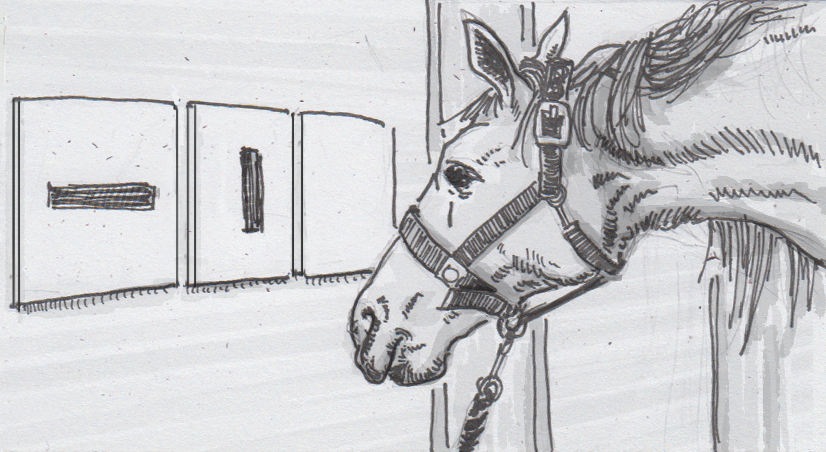 Horses trained to point to symbols to share their preferences

Around the turn of the century, a horse named der Kluge Hans, or “Clever Hans,” excited crowds by apparently answering basic trivia and math problems by stomping out numbers with his hoof. According to his trainer, Hans could not only work with fractions, but also understand and read German, exceeding the abilities of human children (and non German-speakers) everywhere. It turned out that Clever Hans was actually reacting his trainer, having been conditioned to pick up subtle cues when he should stop stomping his foot. Horse owners still teach their horses interesting tricks, but researchers in Norway now say they’ve figured out a way for the animals to explicitly communicate according to their own interests, and not those demanded by their trainers.

The thrust of the study was to come up with an abstract medium that both horses and humans could understand. Horses were first trained to touch their muzzles to any of three boards hung on a fence. The boards were painted with either a single horizontal line, a vertical line, or left blank. Like more traditional training, the horses were then trained to pay attention to what was painted on each board, with each option leading to a different outcome for the horse.

What to wear for today’s weather?

If the horse poked the horizontal line, it would be blanketed for the day. The vertical stripe would trigger a blanket being removed, and the blank square would lead to no change in blanketing. After a few weeks of daily reinforcement, the 23 horses of varying breeds were more closely monitored to see if there was any rhyme or reason to their choices. The pattern that emerged was that the horses were more likely to poke the horizontal board to receive a blanket on a cold day, and more likely to “ask” to have the blankets removed when it was hot, even after allowing for some personality quirks, like a three-year-old horse named Blue who seemed like the attention of blanketing and would ask for a change whenever possible, regardless of weather.

While the question of wearing a blanket is obviously fairly limited in scope, this does seem to show that the horses were generating their own answers. Researchers are interested in polling horses for other opinions, further leveraging domesticated horses’ aptitude for training to learn what they’d like to be doing when not being rewarded with carrots.

Source: Horses can communicate with us - scientists by Helen Briggs, BBC News