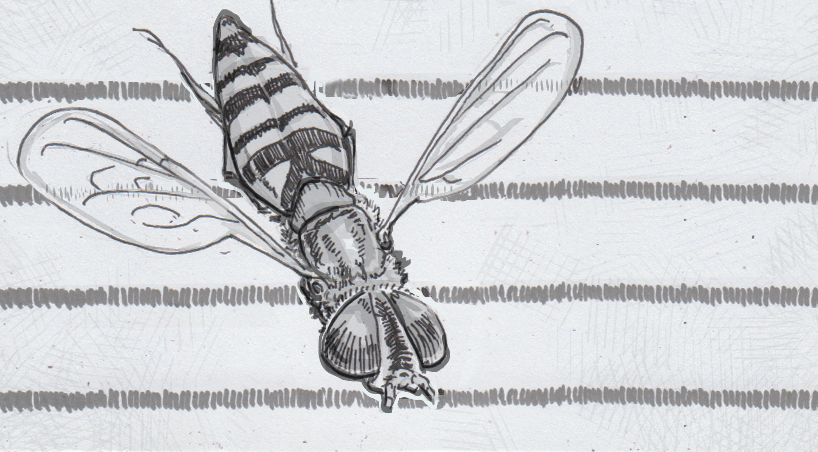 Hoverflies flit in any direction without feeling which way is down

Hover flies are aptly named insects that can fly in any direction without feeling they’re doing so. Like dragonflies, these insects can hover in mid-air, then dart forward or backwards, up or down, with seemingly instantaneous shifts in momentum. Aside from the aeronautic specializations required in the flies’ wings, scientists have also been curious about how these animals with pinhead-sized brains handle these maneuvers. Tests with falling hoverflies point to a model where the flies simplify their navigation by relying on fewer senses than even we do to get around.

Scientists were interested in how much hoverflies perceived and made use of sensing gravity. Coping with gravity might seem like a huge concern for a flying animal, but researchers hypothesized that the insects actually didn’t sense gravity directly, or at least in the same way animals like humans do. When we feel a drop or other sudden shift in momentum, fluids inside our ears slosh to or fro, stimulating tiny hair cells, which send signals about this activity to our brains. Without a clear analog to this system in hoverflies, scientists began looking at how much they react to shifts in gravity in calculating their flight.

To mess with the flies’ normal sense of weight, the flies were suspended and then dropped in a series of boxes. In free-fall, they’d basically feel weightless for a moment, assuming they were able to feel the difference in the first place. The first box was completely dark, and most of the flies fell and crashed at the bottom, apparently unaware they had been moving through space before it was too late. In a bright but featureless box, the flies performed a bit better, but many still hit the ground without attempting to hover. Finally, flies were dropped in a box with horizontally-striped walls, which would provide visual feedback to their movement as it passed by their eyes. With this cue, 90 percent of the hoverflies reacted and avoided crashing.

This doesn’t mean that hoverflies have no sense of gravity at all, but it seems to be fairly lacking in the ways we understand it at a minimum. We know that they are sensitive to smell, but also have highly developed vision that includes being able to see ultraviolet wavelengths of light. Further emphasizing this emphasis on visuals, some species of hoverfly have holoptic eyes, meaning they are so large that they nearly join at the top of the insect’s head. These specializations are then used to guide the flies to flowers, as hoverflies are actually pollinators as adults.

My three-year-old asked: Are they bees? They look like bees!

Hoverflies are indeed flies, but the striped abdomens and pollinating behavior would be easily mistaken for a bee or wasp. By mimicking insects known for posessing venomous stingers, the hoverflies can discourage predators from attacking them as they move from flower to flower.

They also sometimes confuse people who think the flies can sting or bite. Not only do hoverflies not bite, but their larvae are actually considered beneficial to gardeners. Adults help flowers while dining on nectar and pollen and hoverfly larvae eat pests like aphids, scales and thrips.