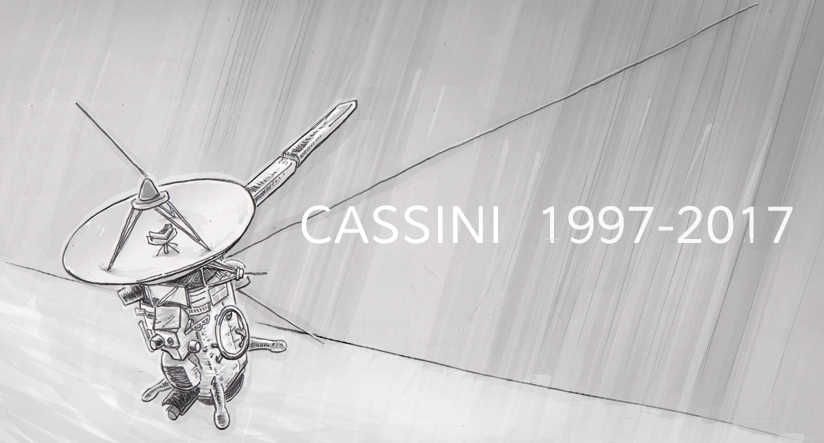 Friday, September 15, 2017, will be the first time my kids wake up without a spacecraft near Saturn. Launched in 1997, the Cassini spacecraft has had its mission extended twice, but a dwindling fuel supply is requiring that the orbiter be permanently added to Saturn’s atmosphere in a “disassembly” procedure expected to rapidly occur at around 70,000 miles-per-hour. This fiery end will give Cassini a unique shot at collecting a final bit of data, but is driven primarily to avoid the risk of the spacecraft accidentally damaging some of the moons we now know might be home to life. It should be expected that spending 13 years around Saturn would enhance our understanding of that part of the solar system, but it’s fair to say that Cassini revealed more than anyone was expected when the mission was first planned in the early 1980s. For now, my kids asked that I mainly focus on the moons.

Again, from our current vantage point that’s been filled with years of daily snapshots of a great gas giant and it’s ever growing list of moons, it may be hard to remember how little we knew of the outer solar system in the past. To back up a bit further, it’s worth mentioning the spacecraft’s namesake, Jean-Dominique Cassini, an astrologer-turned-astronomer that discovered gaps in Saturn’s rings, as well as the moons Iapetus, Rhea, Tethys and Dione. At the behest of King Louis XIV, Cassini joined the Acadèmie Royale des Sciences in 1669, going on to become the director of the Observatoire de Paris in 1671. Beyond the connections to Saturn, it was thought that invoking Cassini for this mission to space would help garner support from the European Space Agency (ESA), which did indeed prove instrumental in getting the project off the ground.

Our view of Saturn didn’t change much until the Voyager 1 spacecraft flew by the planet in 1980. Instead of the inert lumps of icy rock people had once imagined, we saw hints of a diverse group of moons, begging for more investigation. Titan, for instance, was covered in a thick atmosphere, but Voyager 1 didn’t have any instruments that could see through the clouds to know what was below. This became a key part of the Cassini mission design, with the ESA taking the lead in designing the Huygens lander that would later be dropped on the surface of Titan. This collaboration, and some of the aforementioned goodwill that lead to some influential lobbying efforts by the ESA, became critical to seeing Cassini completed, as the project was almost canceled multiple times before it’s launch in 1997.

Touching down on Titan

Once launched, Cassini started sending back mountains of data that opened our eyes to all kinds of new possibilities around Saturn. The Huygens probe successfully visited Titan, revealing that the mix of surface liquids and organic molecules covering the moon might potentially be home to some form of life. In retrospect, dropping a lander into that environment wouldn’t be allowed today, but that’s only because we have now seen the surface of the moon, complete with lakes, riverbeds, dunes, weather and more.

The next eye-popping moon was less expected. Enceladus was observed in 2005 spraying saltwater geysers out of its surface into space. This unexpected site has since catapulted this small moon to the top of researchers’ wish-list of locations to revisit, as these geysers indicate that the moon is even more likely to be home to life than Titan. The salty spray has also been linked to Saturn’s giant “E” ring, which is now believed to be made primarily of ejected ice from Enceladus.

Beyond potentially habitable satellites, Cassini has had time to fill in gaps about other strange moons around Saturn. Iapetus had been a mystery for some time, as it seemed to be half white and half black. The detailed data from Cassini helped explain this appearance, and it was determined that dark red debris from another moon, Phoebe, was essentially painting Iapetus’ surface. So the dark side was heat-collecting dirt, and the light side was ice that hadn’t been painted enough to melt. The moon also had an odd ridge around it’s equator which is now thought to be the result of bombardment and debris collection. It’s not the only moon to exhibit this strange shape, as Daphnis and Pan seem to also have equatorial build-ups of their own.

Daphnis has caught scientists’ eyes for more than it’s slightly oblong shape. The tiny moon is one of many that have been found in gaps between Saturn’s rings, although it still interacts with them. As the small bits of rock and debris move by Daphnis, the moon’s gravity creates waves in the rings shape. Other moons’ interactions aren’t quite so graceful though. In 2013, a moonlet tentatively known as “Peggy,” after the discoverer’s mother-in-law, was observed forming on the edge of Saturn’s “A” ring, only to have apparently been smashed by another object by the time researchers checked again in 2015. Even with that loss, Cassini has nonetheless discovered six new named moons around Saturn, including Methone, Pallene, Polydeuces, Daphnis, Anthe, and Aegeon, bringing the count up to 53, with a few still lingering as “provisional.”

Carrying on after Cassini’s crash

All of the above barely scratches as the surface of the research Cassini has made possible (especially since this post basically ignores what was learned about Saturn itself!) Nearly 4,000 papers have been published using data from the spacecraft, with more yet to come. It will wind down though— as I write this, the final photos have already been taken so the spacecraft can prioritize more easily streamed data, like individual measurements, in its final moments above Saturn. For our next look at Saturn and its moons, we may have a wait on our hands. New missions to Saturn are still in early planning stages at best, but hopefully running out of interplanetary postcards from Cassini will help spark demand for further exploration, just as the Voyager 1 mission sparked ideas for Cassini itself. After 13 years of amazing exploration, we’ve seen too much to never visit again.

My kids asked: Why are you crying, Daddy?

It’s hard to explain, but this feels much more intense than when MESSENGER was crashed into Mercury, or even when Rosetta was permanently parked on Comet 67P. The fact that Cassini has been in space for over half my life, and my children’s entire lives, has definitely made it seem like a significant change in the world, er, solar system. Saying goodbye sucks. The fact that many of the reports on Cassini’s Grand Finale mission are framed as tear-jerking, heroic sacrifices certainly doesn’t help. It certainly didn’t help my kids, who both decided to start crying when hearing about exactly how Cassini would break up, with my four-year-old repeatedly asking “but why are they breaking the satellite?!”

Beyond that, reading about the success of this product of cooperation and curiosity is really heartening, and it’s always good to have examples of humanity being awesome. (And make no mistake— this has been awesome.) However, having no plan for a return yet makes me very nervous. It’s not that I have a line of research I need investigated or investments in aerospace, but that I want to know that our society will still invest in broadening our horizons, simply as an affirmation of our values. I do take some solace in the fact that Cassini was almost canceled, and yet has beat expectations right and left, so I have to believe that I’ll get to see better close-ups of Enceladus before too long. In the mean time, it’s probably time to check in with Juno…