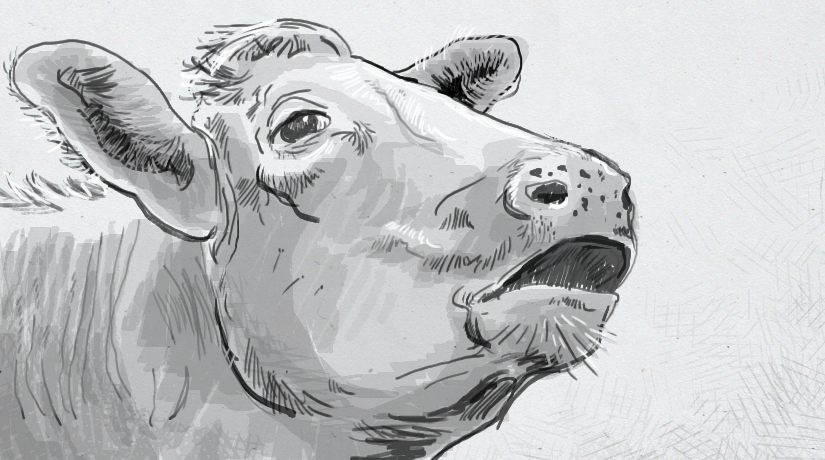 How clearly can cows communicate?

Two cows are standing in a field eating the grass. The first cow turns to the second and says, “Moooooo!” The second cow replies, “Hey, I was just about to say the same thing!”

While nobody expects a lot of depth from cowversations, er, conversations, people working around cows have found that they seem to have a degree of sophistication in their vocalizations. Nobody is suggesting that they can perfectly translate every moo into English, but cows do seem to have specific inflections on their mooing depending on the situation, suggesting that each moo is actually carrying it’s own specific meaning. As herd animals that need to sometimes coordinate their moovements, excuse me, movement, it follows that most moos seem to be tied to an event that requires some degree of outside intervention.

On the social side of cowmunication, sorry, communication, cows have been found to moo when they need to find their herd. When first entering new surroundings, such as a new pasture, they’ve been found to moo to check in with each other, grouping up to avoid being cut off from the safety of the herd. When they’re looking for a special cow in particular, they’ll call but with different intonation. Cows and bulls in heat will moo for each other, and calves and mothers will moo if they become separated. These vocalizations have been found to have even more specificity to them, and will be higher pitched  if a mother can’t locate her calf. Furthermore, these moos are distinct to specific individuals, indicating that cows can recognize their immediate family by the sound of their voice. This may seem obvious, but not every animal does a great job at locating its young.

The other batch of moos seem to be based more around requests or complaints. Cows that are stressed in some way, from being tied up to suffering from some ailment, are likely to moo more to anyone who might be able to help. Hungry calves will moo to their mothers’ when they want to nurse, and adults will moo to farmers when they need to be milked. And like most of us, cows are quick to moan and grown when they’re hungry themselves, alerting anyone nearby that they’re ready to eat.

So while not all moos are equal, they don’t seem to carry a lot of depth either. The need-oriented communication doesn’t leave room for discussing moovies or moosic, with content cows basically staying quiet. Basically, if a cow is in a good moo’d, there’s no need to tell anyone about it.

Source: What Is The Meaning Behind The Moo? by Kristofor Husted, The Salt