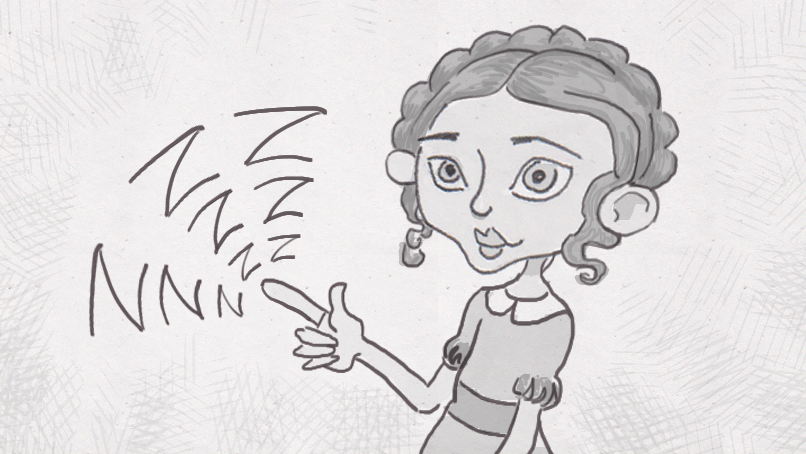 Sciencing the Sisters Eight!
On June 18th, 2017 we learned about

In Durinda’s Dangers, it’s revealed that the second Huit sister can cause people to freeze for varying lengths of time by patting her leg, then pointing at them. It’s not something often seen among super heroes or magicians in fiction, but it certainly provides some utility, allowing Durinda to freeze would-be aggressors in their tracks without causing any permanent harm. The weird part is that the leg patting and finger pointing may not be affecting Durinda’s targets’ directly, but is instead turning their own brains against them.

As described in the book, Durinda’s targets freeze up instantly, and remember none of what happens around them until they unfreeze some time later. This indicates that their paralysis isn’t just affecting their motor control like a spinal cord injury would. Combined with the rapid and complete recovery, Durinda’s targets probably aren’t being damaged at all, especially considering most nerve damage is permanent without a lot of outside intervention. The most likely explanation is that Durinda’s pointing is simply putting people to sleep.

Sleeping out of schedule

While we all do a bit of tossing and turning at night, when it comes time for the Rapid Eye Movement (REM) sleep phase, we basically stop moving. REM is the sleep phase where you’re likely to be dreaming, and possibly encoding long-term memories, and it would be dangerous if we accidentally started acting out any of these thoughts. So the brain induces a sort of general paralysis to keep the wiggling to a minimum, and most dreaming is acted out only with a few twitches plus some… rapid eye movement.

Sometimes the order of operations doesn’t work out right though. Some people find that the paralysis is induced when their brain is still conscious instead of dreaming, a sleep disorder called sleep paralysis. It can be a frightening experience, as your limbs suddenly won’t move, you can’t lift your head, and worst of all, it feels like a weight on your chest is making it hard to breathe, even if you’re actually getting a healthy amount of oxygen. Sleep paralysis has been tied to other sleep problems, like apnea and narcolepsy, which may also help explain how Durinda’s power works.

A nod to narcolepsy

Narcolepsy is a neurological disorder that disrupts how the brain controls it’s sleep cycles, or circadian rhythm. People may feel sleepy all day, be wakeful at night, or even experience cataplexy, wherein they lose muscle strength and coordination for a few moments while otherwise staying awake. Sleep paralysis is also a symptom of narcolepsy, and so this package almost sounds like what Durinda’s finger pointing causes in her targets, as they basically have unpredictable symptoms of sleep (and more) during other activities. The catch is that Durinda’s targets are actually falling fully asleep, experiencing paralysis but without the limp muscles of cataplexy.

How a pointed finger can put someone to sleep is still a bit of a mystery. While she may be inducing some short-lived circadian rhythm disorder, it’s probably not an exact match of narcolepsy, as the roots of that disorder of generally thought to be tied to brain injuries, autoimmune problems, or genetic predispositions. Leaving some mystery intact, it still seems like Durinda’s power could be described as inducing a power nap, whether her target wants one or not.