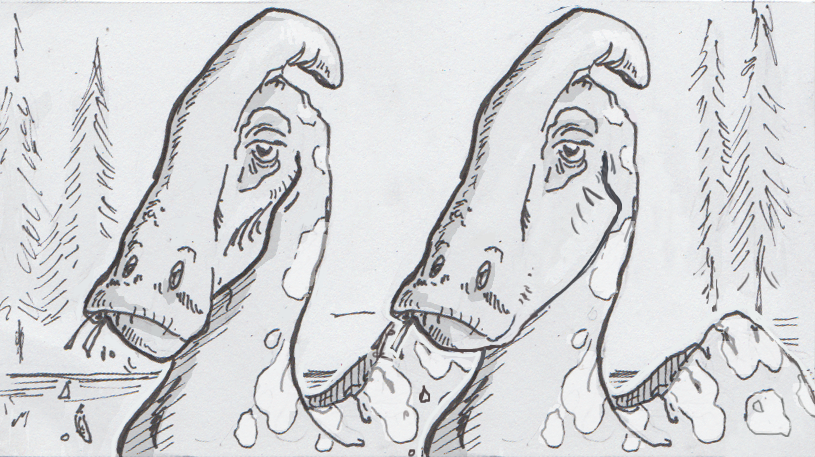 How hadrosaurs chewed with such monstrous mouths

Imagine a mouth lined with 1,400 teeth, stacked in columns for continual replacement. The teeth are curved and angled asymmetrically, embedded in highly flexible jawbones, allowing their owner to shred and consume massive amounts of food every day. While this mandible may sound intimidating, you needn’t worry about it unless you’re a plant in the Cretaceous period, because this crazy mouth belongs to a hadrosaur.

Hadrosaurs are a group of dinosaurs, sometimes referred to as ‘duck-billed,’ who were some of the dominant herbivores of their day. Some species, like Parasaurolophus or Corithasaurus had striking crests on their heads. Otherwise they followed a similar body plan, walking on larger rear legs with smaller arms that could be used for grasping or walking. Part of the group’s dominance has been attributed to their ability to chew, which was a newly evolved improvement in eating, compared to previous herbivores’ dependence on gastroliths.

Elegant curves and no straight answers

These trailblazing chewers didn’t mess around. Most of their aforementioned columns of teeth were densely packed into their cheeks. The top teeth were curved inward, and the bottom teeth curved outward. So when their mouth was closed, their teeth didn’t line up in a straight vertical stack like our molars do. Instead, if viewed from the front of the head, they’d form a sort of S-curve, meeting on inverse diagonal planes. Chewing up and down with the grinding surface at that angle wouldn’t work, but this is where all the other flexible joints in the hadrosaur’s jaw come into play.

A lot of movement in a lot of pieces

The latest theory on how these animals chewed looked at both the ball and socket joints at the back of the jaw, plus the flexible meeting point at the front of the lower jaw. What would approximate to the hadrosaur’s chin, known as the predentary, was not directly attached to the rest of the jaw. This would mean that the bones on the right and left would have a lot of freedom of movement. allowing them to flex and rotate outward to the sides as the dinosaur chewed. I imagine this would mean the animal’s lower jaw would have appeared to widen and contract as they chewed, rather than move up and own. This motion would have allowed the grinding surface of the teeth open and close on each other in a way that would be pushing food back into the center of the mouth as it was pureed for consumption.

While there were thoughts that hadrosaurs would have been limited to grazing low grasses, it seems like all this flexibility would have been great at accommodating thicker, more awkwardly-sized food items, especially if they lower jaw pieces could flex asymmetrically at all. But this last bit is just my personal speculation, and picturing something like the mouth of a Predator at work here.