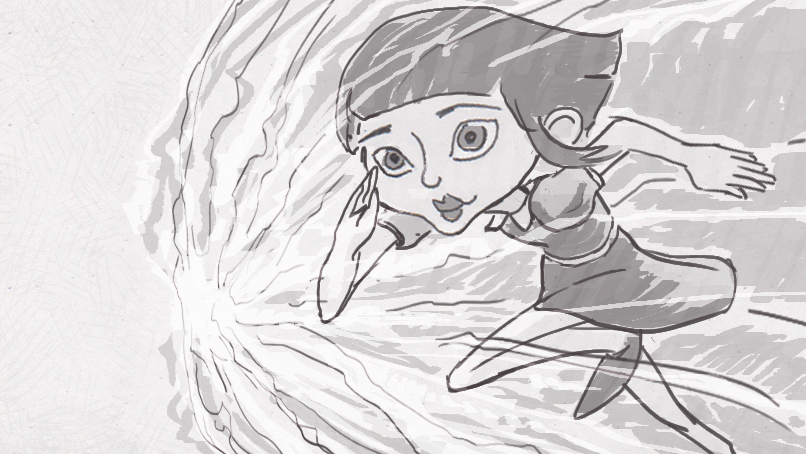 Sciencing the Sisters Eight!
On June 19th, 2017 we learned about

In the fourth book of The Sisters Eight, Jackie Huit finds herself left behind at a train station while her sisters head off to the city. Fortunately, her newfound power lets her move at inhuman speeds, and she’s able to not only catch up to the departed train, but even overtake it along the way. From the window of the train, Jackie’s sisters see her as a sort of blue, blurred dervish, and they don’t even realize it’s their sibling racing by. Jackie arrives at the station barely breaking a sweat, clearly pushing what’s possible for bipedal motion as we know it.

We’re never told how fast Jackie actually travels, but we can make a few estimates. The commuter train is likely to be moving around 30 to 50 miles-per-hour, and since Jackie passes the train, she must be moving faster than that. However, for being a blue blur, she’s still moving slow enough that she takes a few moments to pass the other girls’ window. The relative speed gap between Jackie and the train probably shouldn’t be enough to cause a blur like that— even without checking the math, our eyes don’t have trouble seeing a car passing us quickly on the highway, and so a runner would need to be which suggests that the blur is coming from some other kind of movement. Maybe Jackie is passing the train at an impressive 70 miles per hour, but the blurring is because she’s moving her arms and legs extremely quickly? That might explain things, except that if she’s flailing her limbs that much, she’s probably running very badly.

World champion sprinter Usain Bolt has been studied to see what parts of his movement enables his record breaking speeds. While it would seem like you’d want to pump your legs more frequently to move faster, scrambling your legs like some kind of Looney Tunes cartoon, and possibly Jackie Huit, isn’t really that useful. Analysis of Bolt’s movement found that the trick is actually to hit the ground harder with each step, pushing down with between four to five times their own body weight with each step. However, all that effort still couldn’t crack even 30 miles per hour, largely because of wind resistance. It’s been calculated that as much as 92% of Bolt’s work goes into fighting drag, not working to achieve motion.

There’s no obvious way for a human, even one smaller than Usain Bolt like Jackie Huit, to beat that kind of drag while they’re running in Earth’s atmosphere then. However, what if that weird blurring wasn’t motion blur, but actually a vapor cone. When an object like a jet approaches the speed of sound in the sky, around 770 miles per hour, the sound waves moving through the air begin to pile up in front of the plane, as they can’t move away any faster than the plane is flying. This ends up creating a low pressure zone right behind this leading sound wave that lowers air pressure, sometimes enough to form a cone-shaped cloud around the aircraft. Planes can often push through that cone and continue fighting the air ahead of them, breaking the sound barrier in the process.

Jackie, on the other hand, might be hiding behind this pressure wave on purpose. Perhaps the key to her running is actually that she can reduce the air pressure in front of her body without needing to reach the speed of sound. The lower air pressure would then let her move more freely, keep her cool for a longer run, and make a cloud of water droplets that would distort her image to anyone on the train, assuming there was just enough air pressure to continue breathing. Since humans can’t endure a full-tilt sprint for more than a minute at a time without risking exhaustion, running in this low-resistance bubble would let Jackie work less, and fall back on humans’ special adaptations for long-distance running.