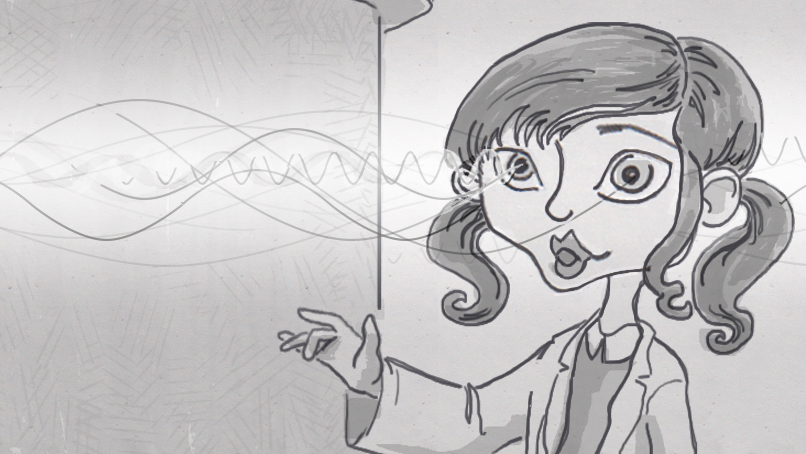 Sciencing the Sisters Eight!
On June 20th, 2017 we learned about

How Marcia Huit could start to see through solid objects

It takes a long time for her sisters to understand what’s going on with Marcia Huit in book five of The Sisters Eight. Her behavior becomes rather erratic, and after a fair amount of confusion she reveals that she’s stressed because she can see and hear everything. Unlike the animal kingdom’s top listeners, like the greater wax moth that can hear a wide range of sounds we can barely imagine, Marcia is just very sensitive to every sound, even those originating a great distance away. However, the weirdest thing is that this seven-year-old can also see through objects, looking straight through buildings as if they were glass.

Our vision depends on the fact that light in the visible spectrum is absorbed or reflected by objects around us. A blue ball will absorb most frequencies of light, but the light with a 475 nanometer wavelength will bounce back, and when it hits the correct cone cell in our eye, it sends a signal that our brain will interpret as “blue.” However, there’s a lot of energy out there that can’t be seen by our eyes, from gamma rays with tiny wavelengths to radio waves with huge wavelengths. These frequencies don’t get absorbed and detected by our eyes, usually passing right through us without any interaction. As a result, they’re essentially invisible to us.

Looking at light we can’t see

The fact that these frequencies of light pass through us is a clue though, since they usually pass through other materials as well, at least to a point. Radio waves, for instance, can pass through the walls of a house pretty well, although if you’ve ever lost cell reception in the middle of a building, you’ve noticed that they do get blocked when a material is at least as thick as the signal’s wavelength, which can range from four inches to 62 miles long. If any of these waves were actually reflected, they could conceivably be detected bouncing back, and be used to build an image like our eyes and brains process stimuli from the visible spectrum.

Researchers at MIT have been working on using radio waves as an alternative to visible light for a while. They’ve built antennas that can emit high-powered radio waves, and then try to catch enough of those waves that might bounce back to build a picture. By carefully interpreting what wavelengths get reflected first by a wall, and then by objects beyond the wall, they can essentially see through that wall to know what’s happening inside a building. The catch for Marcia is that the technology to do this isn’t small— the first models of these sensors were around eight feet long, designed to be mounted on a truck, not inside an eyeball.

Other strategies for seeing

Radio waves aren’t the only thing to penetrate common materials, but other portions of the electromagnetic spectrum present their own issues. Gamma waves have very short wavelengths and can pass between molecules in objects, including the molecules that you might want to see. They do interact at times, but not reliably enough to form pictures of anything that’s not at least as dense as lead. To add another tool to Marcia’s visual toolbox, there’s also a chance she is making use of less traditional detection methods, like electrons passing through matter and back in a process called quantum tunneling. Right now, this requires elaborate equipment with carefully arranged lasers and detectors, but an electron’s return trip through other matter could conceivably be used to create an image of what’s behind a wall.

In the end, none of these fully account for Marcia’s enhanced vision on their own. However, if her visual receptors could somehow make use of a wider range of the electromagnetic spectrum, some of those wavelengths would be able to provide information about objects behind other objects. By blending and filtering which range the spectrum she focused on, she might be able to see through walls bother near and far, although how she makes her eyeballs collect all those wavelengths remains to be seen.