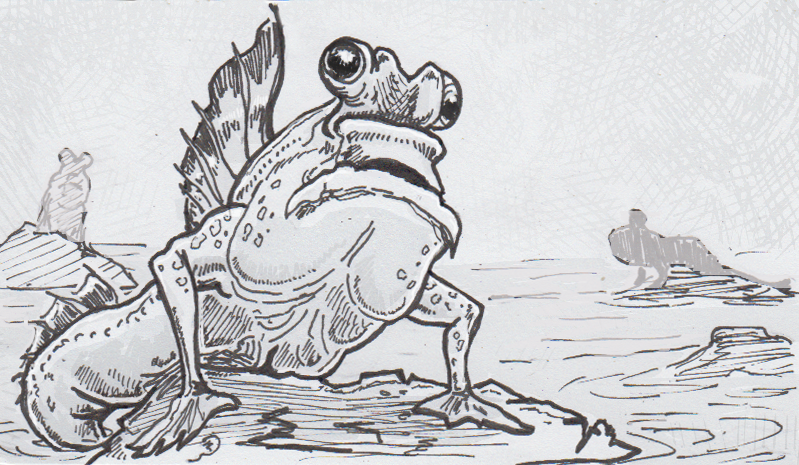 How Mudskippers eat when it’s too dry to swallow

The Atlantic Mudskipper eats in a way that would push just about any parent’s buttons. They spit, suck and then swallow their food in one big gulp. But this is all completely necessary, as it’s one of the only ways that a fish eating out of water could possibly make up for their lack of a muscled tongue. They may also be a model for how our ancient ancestors first started tackling this problem when they emerged from the sea 350 million years ago.

Fish let the water do the work

Normally, a fish eats food by getting close to it and then sucking it into their mouth, biting if necessary, before sucking it down it’s throat. That sucking and gulping is only made possible by the hyoid bone. The hyoid, which is found on many animals in some form or another, is used in fish to expand the cavity of their mouths and create suction. That incoming water is then what forces the food down the fish’s throat. Without the incoming water, the fish’s tongue isn’t in any state to really push the food anywhere.

While most terrestrial animals have overcome this issue with more muscled tongues that can manipulate food without that aid of suction, the Mudskippers don’t have that luxury. They’re still more fish than land-based tetrapod, and so they’ve had to come up with a fish-oriented system that can work on land. The answer was what researcher Krijn Michel called a “hydrodynamic tongue.”

Mudskippers BYOW (Bring Their Own Water)

After watching the small fish with high-speed cameras, it was seen that they pick up food by spitting out a dollop of water from its mouth, letting that envelop their food, and then sucking it all back down. It basically carries the necessary water with it while it’s out for a walk. If it doesn’t have enough water ready to go, it can still scoop up food, but it still can’t swallow it until it gets back in the water to wash the food down with.

They’re not quite a missing link explaining how land-based swallowing got started, but they’re close. In x-ray video, the mudskipper’s hyoid bone was seen to move in a very similar motion to that of a newt— the mudskipper just lacked the muscled tongue to make the process complete. That and a straw to blow bubbles in their milk.

Source: Fish that Walks on Land Swallows With Tongue Made of Water by Ed Yong, Not Exactly Rocket Science