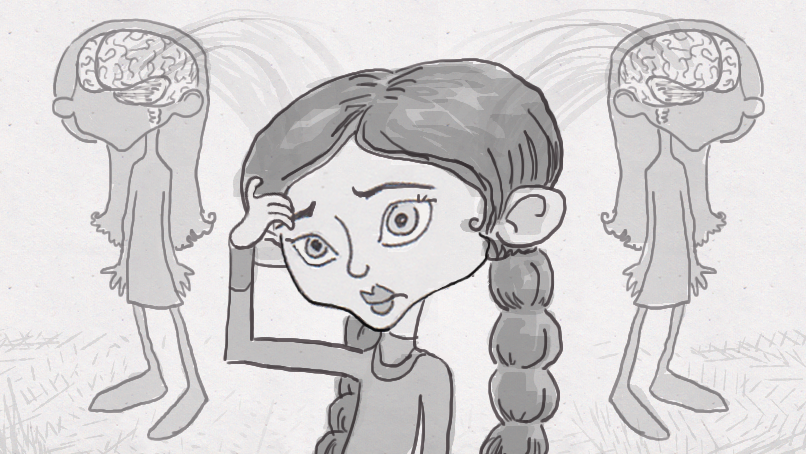 Sciencing the Sisters Eight!
On June 20th, 2017 we learned about

Book six of The Sisters Eight reveals that the anxiety-ridden Petal suddenly has a whole new set of worries in the world, because in addition to her own thoughts, she can now hear what’s happening in other people’s heads as well. The ability manifests very similarly to listening, as Petal needs to concentrate to pick out whichever voice she wants to hear, almost like trying to listen to a friend among the chatter of a crowded room. As with almost everything in her life, Petal isn’t happy about this development, even though eavesdropping on the minds of others ends up saving one of her sisters from danger.

Reading minds has been a fascinating concept for ages, in no small part to humans being social animals that depend on communicating with each other. Our anatomy has even evolved to better enable communication, and some of us can be quite skilled at reading subtle cues to learn more about a person than they intend to reveal. In some cases, these cues and an inclination for communication have been exploited in a series of techniques known as cold, warm and hot readings. A cold reading involves making general statements, like “You know someone named John” to a large crowd, allowing people to identify themselves as being a match for those statements. Hot readings are even more manipulative, where the supposed psychic is secretly given information about a person, then pretends to read their target’s mind by revealing it later. However, these forms of “mind reading” are more about the tricking an audience, and obviously a nervous seven-year-old like Petal would much rather hide under her bed than impress a large crowd.

A form of mind reading that’s actually being explored by science is based around special brain cells that have been dubbed “mirror neurons.” These neurons have been found to activate when performing an action as well as witnessing someone else perform that same action. This neurological “monkey see, monkey do” concept was once thought to be the key to unlocking human learning on a grand scale, although now expectations are a little more refined. These brain cells probably do play a role in social learning, but they’re not the only influence on how we share information and experiences with each other. As far as Petal is concerned, mirror neurons have generally been tied to experiencing activity rather than inner cognition, and so they’re probably not how she’d listen in on the snarky comments her sister Rebecca might be thinking at any given moment.

This doesn’t mean that reading the inner thoughts of another person is impossible though. It’s just that at this point you probably need some very powerful computers and embedded electrodes to do it. Volunteers’ brain activity was monitored while they looked at images of houses, faces or blank squares, and those patterns were analyzed to predict which type of visual a person was viewing at any given moment. With 400 millisecond exposures to each image, the brain activity was consistent enough that the computer algorithms could correctly identify what someone was seeing almost as fast as they could see it. While each of us might experience the world in our own way, it turns out that how our brains initially process stimuli is universal enough to be recognizable from the outside.

This suggests that Petal’s power is similar to this kind of pattern recognition, only with much better resolution and without the need for electrodes. If she’s able to somehow detect the electrical activity in different parts of another person’s brain, she could hypothetically know what that person is looking at. Other studies have found similar consistency in how our brains remember and sort our vocabularies, and the combination of these two types of activity could then be used to “hear” what someone is thinking. It’s always assumed that Petal hides under beds out of fear, but maybe that’s just a good quiet place to tune into other people’s heads.