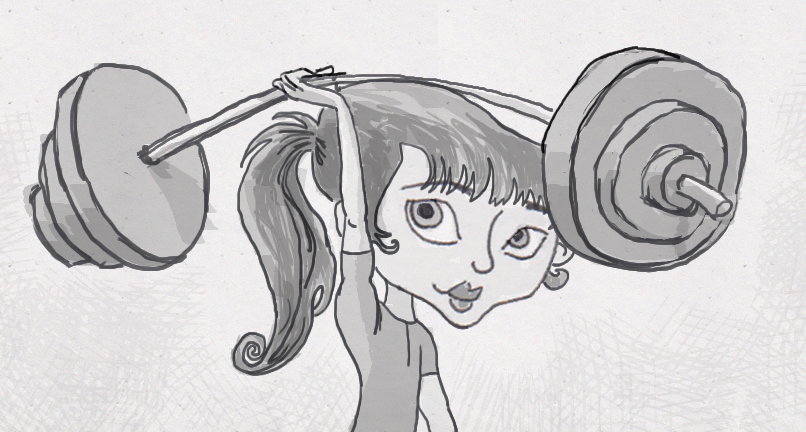 Sciencing the Sisters Eight!
On June 21st, 2017 we learned about

How Rebecca Huit heaved a Hummer over her head, plus handled her flaming fingers

Rebecca Huit is one of the younger sisters in The Sisters Eight, but she commands an outsized amount of attention from her siblings, even before gaining her powers. When she does start demonstrating unusual abilities, it’s unclear what’s happening at first, because she manifests both inhuman strength and incendiary fingertips. There’s little reason to suspect these abilities are tied to each other, and so we’ll unpack each power on their own.

The development of Rebecca’s strength may have two distinct causes. At the opening of Rebecca’s Rashness, we find that Rebecca is vigorously training at all hours of the day, and getting eye-popping results. She’s able to easily support the full weight of her sister, Petal, from one arm with no sign of fatigue, indicating that she’s somehow gotten a lot stronger than the average seven-year-old. The book fails to mention any changes to Rebecca’s appearance, but there’s a chance that she’s suddenly been building muscle mass because her body has stopped blocking its growth.

Many mammals, including humans, cats, cows and dogs, naturally create a protein called myostatin. This protein acts as a regulator on our muscle development, keeping us from building excessive amounts of muscle that might cause a drain on our energy levels without much practical gain from an evolutionary standpoint. When genetic mutations, or a decrease of another protein called follistatin, somehow leave an animal without myostatin, muscles develop to unusual sizes, greatly increasing the creature’s strength. Even newborn babies lacking myostatin will show bulk in their leg muscles, and can lift over six pounds in one hand by the time they’re four and a half. If Rebecca has suddenly dropped her myostatin production, developing enough muscle to lift Petal wouldn’t be a big challenge.

Shortly thereafter, Rebecca amazes her family by lifting up an entire Hummer, raising it over her head. Hoisting 6400 pounds into the air is a far cry from supporting an older sister, and even new muscle growth might not account for the amount of strength necessary. Since Rebecca was lifting the Hummer to help her friend Pete, there’s a good chance that she was tapping into what’s known as hysterical strength. This is the strength that people tap into in emergencies to do things like… well, rescuing friends trapped under cars. In real life, these people are usually only lifting a quarter of the car’s weight to free someone, and they’re not actually using more strength than their muscles normally offer— it’s just more strength than the body ever wants to use.

Like the myostatin that keeps our muscle production in check to save resources, our brains normally cap our muscle exertion below their physical limits. This provides a buffer for our safety so that we don’t damage muscles, ligaments, tendons or bone. It also helps us save some calories to get home to recuperate after exertion, rather than leave us completely limp on the ground. Hysterical strength isn’t achieved with boosted muscles then, but by removing the feelings of pain and fatigue that normally keep things in check at around 60% of our potential strength. People who have experienced hysterical strength have sometimes paid a price in self-induced injuries, although they usually don’t notice things like eight cracked teeth until they’ve calmed down after the triggering emergency.

For better or for worse, the flames that later shoot from Rebecca’s fingers aren’t tied to emergency responses, as she can set things ablaze at will. Flames are described as blasting from her fingers, indicating that there’s some sort of pressurized fuel source to push the fire away from her hands, like the pressurized nozzles on a flamethrower. Unlike a flamethrower, we see no sign of a pilot flame though, so some other mechanism must be heating things up enough to burn things down than traditional fuels like propane or butane.

A model for spraying flammable fuels is the African bombardier beetle. When threatened, this beetle can spray a mix of hydrogen peroxide and hydroquinones that combine in mid-air to form oxygen, boiling water and benzoquinones. None of these components aren’t literally combusting during this reaction, but the resulting spray can cause chemical burns, clouds of vapor and intense heat, sometimes as high as 200° Fahrenheit. Potential predators hit this cocktail are likely to be burned and incapacitated, allowing the beetle to escape danger. It’s not going to literally set your drapes on fire necessarily, but if Rebecca was spraying anything like this out of her fingers it would still cause plenty of damage.

Overall, this all leaves Rebecca as a very dangerous, volatile girl, and most people wouldn’t want to risk being near these abilities on the best of days. The combination of extra strength operating at its full capacity, even temporarily, while spraying noxious, burning chemicals is so extreme that Rebecca’s eventual imprisonment really seems like the only rational option for the remaining siblings. As well as the surrounding neighborhood.