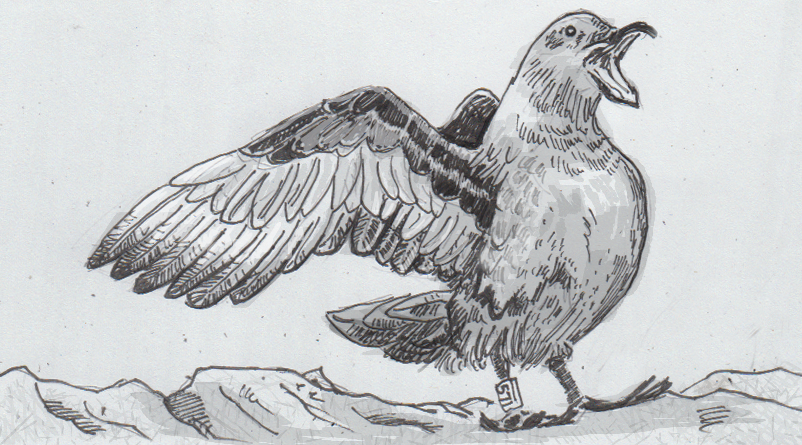 When making a first impression, it’s recommended that you don’t introduce yourself by fiddling with someone else’s offspring. Even if your intentions are benign, it’s likely to be a taken the wrong way, as researchers discovered when working with brown skua chicks on islands north of Antarctica. They also discovered that you really can’t take back those first impressions, as these parents made a point of learning to recognize exactly which humans were harmless, and which ones looked like trouble.

The original research involved surveying the growth of the brown skua (Stercorarius antarcticus)population on King George Island. Once a week, researchers from Seoul National University would go and visit skua nests to measure how eggs and chicks were progressing. However, after just a couple of visits, the adult birds started attacking the researchers, diving at their heads with impressive fearlessness for a bird that looks like a large, brown seagull. As the birds reacted to human visitors from greater and greater distances from the nest, it was clear that they’d learned what their human visitors were up to. What was surprising was that they’d also seemed to learn which humans they had previously encountered, and which ones could be ignored.

The research team suspected that the skuas were recognizing individual people, which meant it was time for a test. Pairs of researchers then systematically approached nesting areas wearing identical clothing, and trying not to make any distinctive movements. One member of the pair had inspected a nest at that location, and the other was a neutral party. Each time, the skua showed no difficulty in recognizing which human they’d dealt with before, kicking off their defensive maneuvers with little hesitation. The researchers weren’t sure exactly what feature was tipping the skua parents off, but they were fairly certain it wasn’t smell since shifting winds often meant that they were downwind of the birds, which didn’t seem to pose a problem for them.

This behavior isn’t completely surprising. Other birds, like crows, are known to learn individual humans‘ faces and react accordingly. Skuas themselves are known to be rather daring, possibly even clever predators, hunting other birds but also demonstrating unusual behavior, like stealing milk from nursing elephant seals (seriously, a three-pound bird risking it’s life against a 2,000 pound seal for milk of all things?!) For the case of this study though, what has scientists marveling is how the skuas are demonstrating the flexibility of their thinking. Humans have only had sustained contact with these birds since the 1950s, when they first started building bases in the Antarctic, so they haven’t had generations to learn how to watch us. Instead, they’ve had to use frameworks that must have evolved for other tasks and apply them to deciphering human gaits or faces, traits that even humans sometimes can’t keep track of.

Source: These Birds Learn to Recognize Humans They Hate by Elizabeth Preston, Inkfish