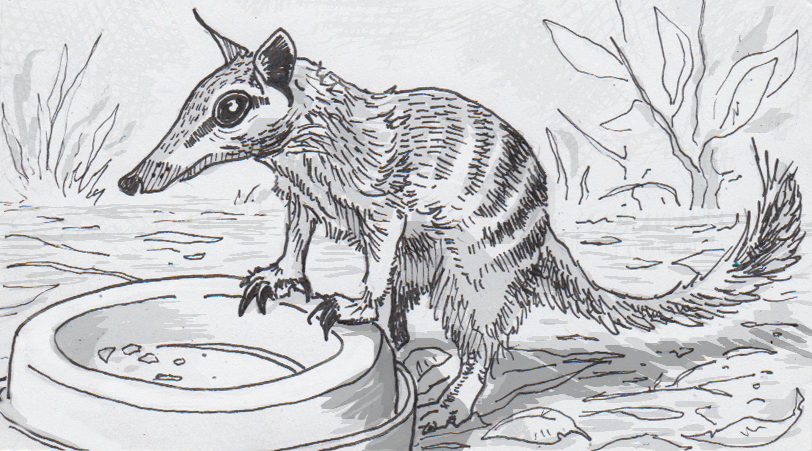 How to cook for 40 numbats

Getting something good to eat at a zoo isn’t easy. Either it’s not very healthy, it’s expensive, or both. This is true for more than visitors lamenting the $5.00 nachos, as making sure the animals are well fed is a challenge too. Each species has its own dietary needs, some of which developed in environments very different from the cities and towns where zoos are found. But with animal health on the line, zoos take this seriously and have generally risen to the challenge.

The first challenge for zoo keepers is that many large animals eat a lot. Everything from carrots to mice to mealworms must be made available in huge quantities. In the case of the Smithsonian National Zoo in Washington, DC, their annual need for over 293 tons of hay has pushed them to start growing their own, rather than rely upon third-party suppliers.

Still, even when massive amounts of some foods are available, substitutions must still be made. Procuring shrimp and krill for flamingos is expensive and difficult, so the birds rarely dine on their native cuisines. However, they then lose the source of their distinctive pink coloring, and so to keep visitors happy, the flamingos are also fed beta carotene supplements, which color their feathers. The Flamingos themselves don’t seem to mind much either way.

Some substitutions are more serious. While fruit would seem easy to offer to most animals, the food we feed ourselves has been bred for thousands of years to match human preferences, which usually means higher concentrations of sugar. As such, animals like gorillas can become sick eating a banana we’d buy at the grocery store, as their guts are expecting wild fruit and fauna with less sugar.

Some of these compromises have required numerous iterations before the right recipe was found. The Perth Zoo in Australia struggled for a long time to discover the best menu for their 40 endangered numbats, also known as banded anteaters. Numbats normally live on termites, but starting a termite farm to provide these marsupials with 15- 20,000 termites a day was impractical. Instead, they started them on a dry kibble (like cat food), that was augmented some dead and live termites.

That recipe was appreciated, but didn’t seem to cover the numbats’ nutritional needs. Nursing mothers weren’t able to produce enough milk to feed their babies, who later died. More protein was added in the form of crickets and mealworms, but those got gross after oxidizing in the Australian heat, and the numbats wouldn’t touch it. The extra insects were then replaced with more kibble, which lead to diarrhea.

The final answer was that the termites’ diet needed to be considered also. When the numbats ate the termites, they were also eating the wood that the termites ate, providing a source of fiber. So cellulose was mixed into the kibble slurry, which cleared everything up. The zoo has now had many successful and regular numbat births.

It should be noted that these changes weren’t made overnight. To avoid a rapid succession of disruptions to the numbat diet, these adjustments were made over the course of months, ideally coinciding with the gestation of new numbats. And even after this painstaking process, there are still some complaints, with at least one resident of the numbat exhibit often sifting through his food, only looking for the tasty termite bits.

Source: How To Feed A Numbat: Zoo Cookery Aids Endangered Species by Sujata Gupta, The Salt