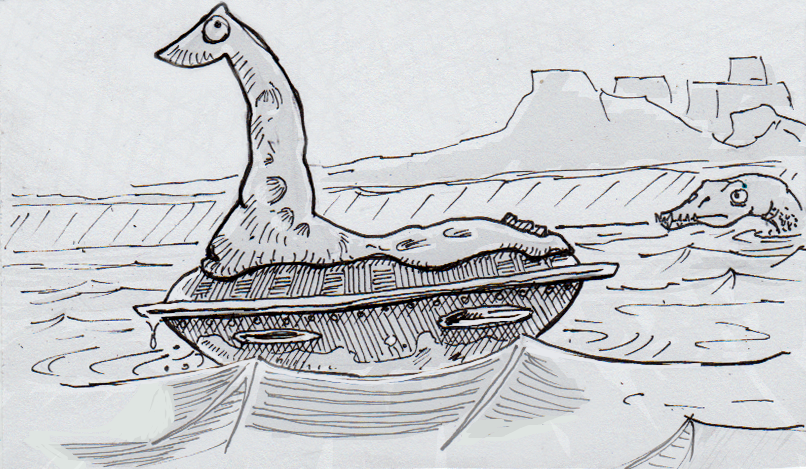 How we got a plesiosaur from vengeance on The Daily Mail

The legend of the Loch Ness Monster goes back hundreds of years, with vague mentions of river monsters dating back to the 7th century, roving the countryside to eat sheep. Our contemporary image of the creature, resembling a plesiosaur, seems to have been inspired by things like King Kong, as well as a desire for revenge.

In 1933, there were a number of reports from around Loch Ness in Scotland of monster sightings. Sometimes they were on land, sometimes in the water. The creature was seen doing everything from eating livestock to causing motorcycle accidents. Understandably, the burst of excitement sparked interest from more and more people, and in 1934 The Daily Mail newspaper hired Marmaduke Wetherell, a big game hunter, to go to Loch Ness and track this mysterious beast.

Wetherell arrived at the lake and found some amazing footprints along the shore. The large tracks seemed to be from a creature at least 20 feet long, and plaster casts were sent back to the London Museum of Natural History for examination. That examination found the prints to be matches for a hippo’s foot, meaning they were probably made from a taxidermied hippo-foot ashtray. None of this was good for Wetherell’s reputation, and he was mocked in The Daily Mail for falling for a hoax.

Wetherell responded by starting a hoax of his own. With help from friends and family, a foot-long monster was crafted out of a toy submarine and some modeling putty. They then put the ‘creature’ in the water, took some pictures, including the most famous “Surgeon’s Photo,” and passed the film along to Colonel Robert Kenneth Wilson. Wilson sold the photos to The Daily Mail, where they were enthusiastically published, solidifying the Loch Ness Monster in people’s imaginations for at least another 85 years.

When the photos’ popularity exploded, Wetherell and his conspirators were taken aback. Instead of revealing their plot to embarrass The Daily Mail, they let the story carry on for decades. And while Wetherell’s son Ian has since spilled the beans on those photos, other people have carried on either with new hoaxes or the earnest belief that a prehistoric, cold-blooded, carnivorous marine reptile is somehow alive and unmolested in cold lake in Scotland despite the now ubiquity of surveillance equipment in everyone’s pocket.

My kindergartner said: Maybe the monster has a secret hole at the bottom of the lake, and it’s just afraid of all the attention so it hides. And that’s where it hides it’s poo too, so nobody finds evidence of anything. And maybe it had a special bubble to go out of land and eat sheep and cause the motorcycle accident and… well, at that point it was bedtime, so who knows what else was in her head at that point?

Source: The Surgeon's Hoax by Lee Krystek, The Museum of Unnatural History