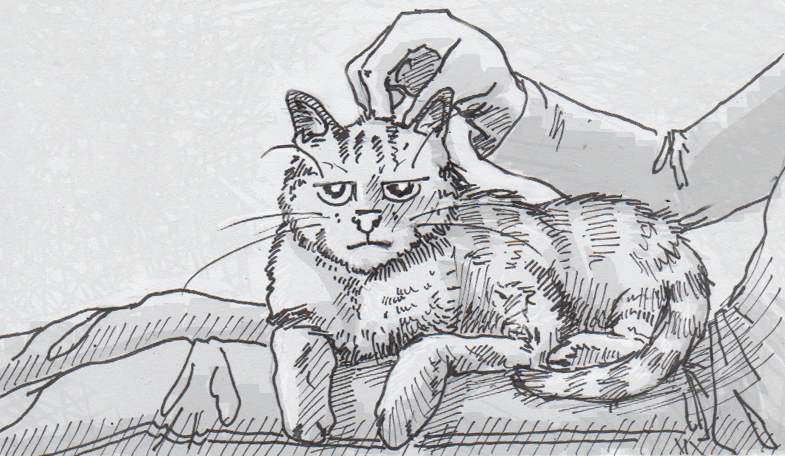 Domestication is more than just feeding and housebreaking an animal. It also involves generations of genetic manipulation through controlled breeding, so that desirable traits, such as body size, hair, or even temperament can make the animal a better match to live with us, often to the point of dependence. We’ve made significant changes to horses, ducks, dogs and …cats? That last one isn’t so clear, actually.

Our best guess is that we’ve lived with Felis Catus, house cats, for up to 9,000 years, although stronger evidence for how this relationship started is only 5,300 years old. As farmers in China improved their yields, they needed to store surplus grain, which of course attracted rodents. Who better to show up and eat those rodents than our new feline companions? (Although, when I posed this question to my kids, my two-year-old enthusiastically volunteered that he would be the one to eat the mice.) This all makes sense as an origin story for domestication, the problem is how little has changed since then.

Wildcat in the house?

For supposedly domesticated animals, house cats are nearly identical to their wild counterparts. Genetic differences are minuscule, with the stripes of a tabby cat being a perfect proxy for those in the wild. Despite receiving food from humans, cats seem to retain all of their hunting instincts, sometimes decimating bird and rodent populations. We’ve made some small cosmetic changes through breeding, but nothing that matches the reshaping and dependence that say, a bulldog, has on humans. So are cats domesticated, or is this a relationship of convenience?

One glimmer of a deeper interaction is being investigated in the genes governing cat (and other domesticated animals’) behavior. There may be an increase in these animals interest and trust in receiving rewards from humans, indicating that some long-term changes have been made. Even if we haven’t completely domesticated these animals by strict definitions, it seems that we’re probably devoted enough to wait for our cats to warm up to us a bit more.