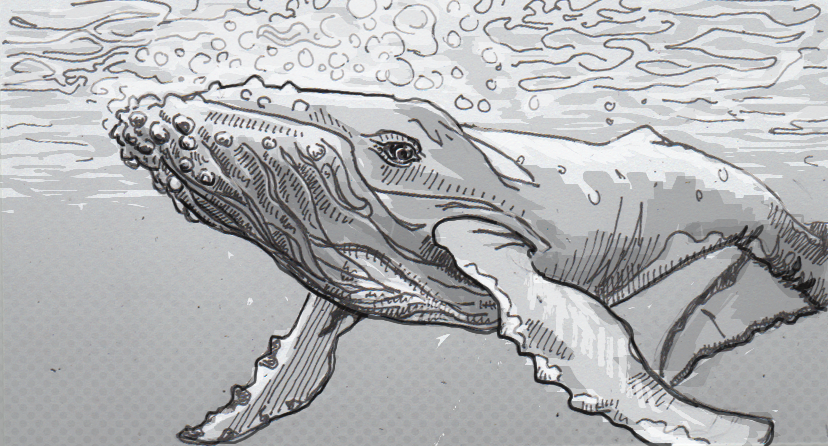 Moving through air can be very similar to moving through water, thanks to both substances being governed by the rules of fluid dynamics.  While not as dense as air, the principal of lift helps bodies move and maneuver through water, with a few modifications. This has helped some animals make the shift from soaring though the skies to swimming through the seas. It’s also why engineers are looking to oceanic behemoths for ways to make our airplanes and wind turbines more nimble in the air.

The swimmer in question is the 33-ton humpback whale (Megaptera novaeangliae). While not the largest or the most voracious whales in the seas, they have the distinction of being very large while living off a mixed diet of krill and fish. While the larger blue whale hunts by aiming upward into a large mass of krill, a humpback often has to also maneuver its large body quickly to more actively catch its prey.  To do that, humpbacks need flippers that let it cut through the water more easily, reducing resistance or drag while maintaining the lift gained through the forward momentum.

A traditional wing shaped flipper, with a straight, curved leading edge, would do this pretty well, but not well enough for this large marine mammal to stay efficient when hunting. Instead, it’s flippers feature a sort of scalloped edge, which at first glance don’t match our idea of “aerodynamic” (or hydrodynamic, in this case.) The curves on these flippers are called tubercles, and they allow the whale to increase it’s range of maneuverability by 42 percent without stalling in the water.

Engineers have been taking this apparently efficient shape and testing it on various airborne objects. An airplane wing with tubercles was found to have 32 percent less drag moving through the air. They’re also looking to apply them to the blades of wind turbines. If a blade can cut through the air more easily thanks to these tubercles, it takes less wind to get the turbine moving. A lower threshold for movement means that the turbine could be useful in areas that aren’t known for having strong winds, opening up new possibilities for wind farm locations.