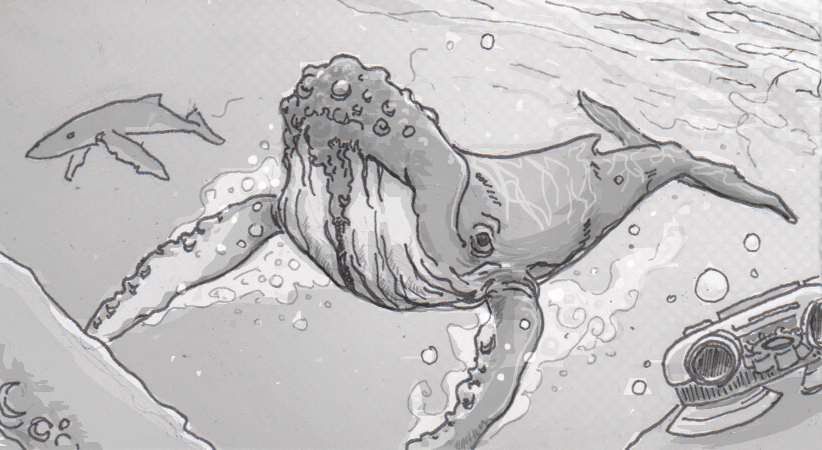 Humpback whales can swim at almost 17 miles per hour, propelled by their large flat tails through the water. Like a huge paddle, humpbacks and other cetaceans thrust themselves forward, relying on their front flippers to help steer their way through the water. Humpbacks aren’t the fastest whale out there, being outpaced by both larger and smaller cousins, but new evidence suggests they may be holding back. Video has captured humpbacks making new use of their flippers, flapping them like a penguin’s wings to generate additional thrust, a maneuver never seen before in any whale.

The fact that this flapping was observed in humpbacks (Megaptera novaeangliae), as opposed other cetaceans like dolphins or sperm whales isn’t surprising. While all these species need speed to catch food, humpback flippers stand out in their shape and relative size. The long flippers swap out the simple curve most marine animals have on their fins for knobby, seemingly awkward leading edges. However, those knobs, called tubercles, actually help cut through the water more efficiently than a smooth flipper, making humpback movement a bit more efficient. They’ve long been known to make use of their flippers for impressive maneuverability in the water, pulling off twists and turns that might make a blue whale jealous.

Adding flapping to this list of flipper achievements is something new though. It doesn’t appear to be a big part of humpback movement at this point, and a study with video footage of 200 different whales only documented flapping twice. Researchers would obviously like to gather more data with further use of new, whale-mounted sensors to get a better sense of how often these whales might incorporate flapping into their movement. Even occasional use would change our understanding of how these massive creatures efficiently move through the oceans.

At this point, analysis of videos suggests that flapping might not be the easiest way to move. Even with the tubercles helping to cut through the water, researchers suspect that flapping requires a lot of energy relative to a tail flap. However, it would also give a lot of thrust, so perhaps it’s like a temporary turbo option for whale mobility. If it turns out that the physics of this flapping really does pay off for the humpbacks, it may help inform human engineering, since whales are still better at moving 33-ton objects through the water than we are, even without the flapping.