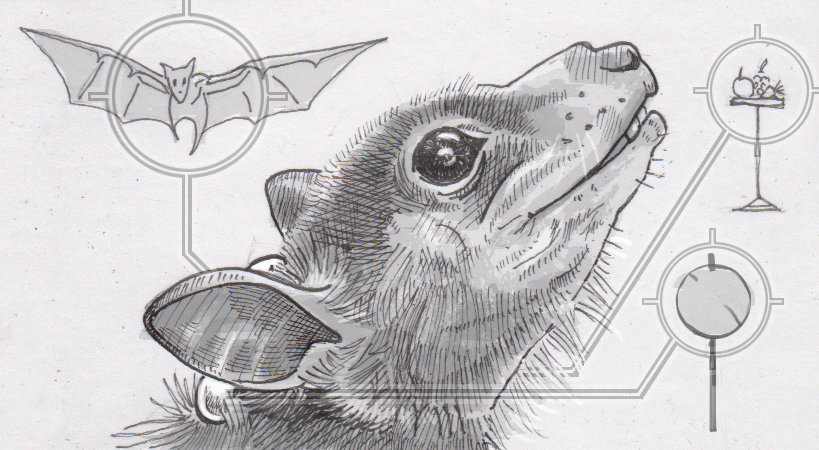 You can, presumably, walk through your house without needing to concentrate on where you are. You’ll probably make a note of a chair out of place, or shoes left on the floor, but you won’t have to think much about your relationship to the space around you thanks to your hippocampus. This small structure in the center of your brain has been found to use neurons known as “place cells” to essentially build a map of wherever you are. In addition to keeping track of your position in your immediate surroundings, researchers are now finding that the hippocampus is also tracking where social peers are moving, as well as the trajectories of other objects.

To see these varying layers of functionality in action, researchers monitored the brain activity of both rats and Egyptian fruit bats while they moved through a closed environment. They compared which neurons in the hippocampus were active when the primary animal was moving to when they watched a peer moving through the same space. For rats, this was easier, as the primary rat could watch from a closed space while their peer explored a simple T-shaped maze. The bats initially wanted to fly right alongside their peers though, so researchers had to rely on social hierarchies a bit. They allowed an alpha male in the group to fly between designated waypoints first as a “teacher,” while monitoring the brain activity in a subservient “student” bat who had to wait its turn.

With lightweight “neural loggers” in place, researchers were able to precisely observe which neurons in the hippocampus were needed for each phase of each experiment. With both rats and bats, the place cells seemed to be sorted into a few general groupings. Some were active only when the primary animal was traveling through the maze, or flying to the designated perches. Other place cells seemed to be designated for tracking the peer animals’ travel, although there was some overlap in these groups, possibly for when the primary animal arrived in a location previously occupied by its peer.

Finally, there were cells that were activated by watching non-animals in the space. The bats, for instance, were shown bat-sized balls that were moved through the same course they’d flown through themselves. This movement was still mapped to place cells in the bat’s hippocampus, but they didn’t show the same overlap as before. There seemed to be a bigger distinction being made for the ball, although at this point it’s hard to be sure if this was because the bat recognized that the ball wasn’t alive, or if it was simply not a bat.

More than a simple map

While the bundles of place cells weren’t described identically in both studies, they both point to similar categorization in rat and bat hippocampuses. The place cells for the primary animal partially overlapped with the cells activated by watching a peer, and these were separate from inanimate objects on the same map. Researchers suspect that the overlap with living peers may be informed by their social relationship to the primary bat or rat. This would mean that the hippocampus isn’t only charting the physical world, but also the animal’s social relationships as well. If this is true, a bat watching a rat would map the rat’s location more like it mapped the ball- as a discrete group, instead of overlapping with the bat’s own location.

The functionality of these animals’ hippocampuses isn’t only relevant to how a rat finds its way through burrow. The similarity between these two species’ brains is very likely to originate from a common mammal ancestor, which means that our own hippocampus is mapping the world in the same way. Even if we don’t normally need to consciously think about these relationships when walking through our house, knowing how our brains deal with the world will help us work with these functions break down due to aging, disease or other damage.

Source: ‘Bat-nav’ reveals how the brain tracks other animals by Alison Abbott, Nature