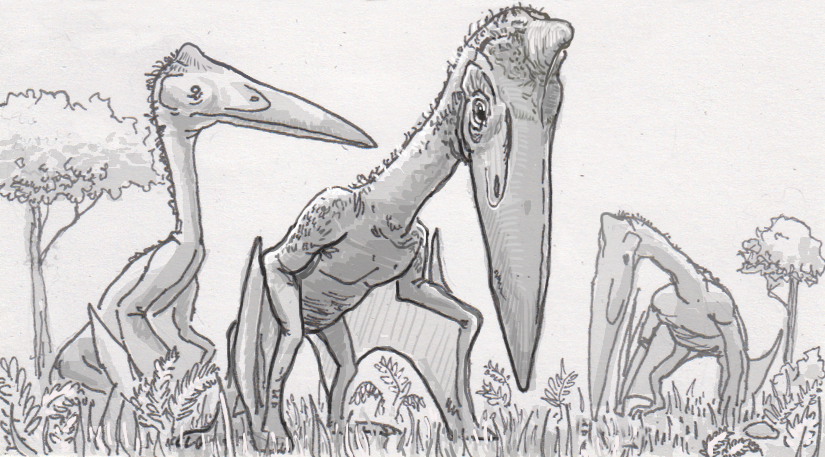 Identifying a pterosaur from a pelvis evolved for walking and leaping

Identifying flying animals by their hip bones isn’t easy. Generally, heads and wings are the big points of interest, as they give clues about maneuverability, diet and more, but we don’t get to choose which parts of an ancient skeleton get preserved. A recent example of this challenge started in 2015, when a strange bone was found in Alberta’s Dinosaur Provincial Park. The bone was in good enough shape to show specific structural features like muscle attachment points, but the overall shape was so odd it took extensive efforts to even be sure it was from a pterosaur rather than a dinosaur. However, the family of pterosaurs that has now been identified was actually very dependent on specialized hips, as they probably spent a huge amount of their time walking on the ground.

Identified as an azhdarchid

To help identify this walking, flying creature from the Late Cretaceous period, researchers enlisted the help of pterosaur expert Liz Martin-Silverstone. The team had done comparative analysis to rule out the chance that this strange pelvis was from a theropod dinosaur, but further work was needed to narrow down which kind of pterosaur would have hips so similar to animals that spent their time walking on the ground. Introducing information about the hindlimb helped a lot, as it showed extensive muscle attachment points for a very strong leg. The owner of the hips had been a azhdarchid, a family of pterosaurs noted for their big heads, long necks, and body orientation that would have let them look a giraffe in the eye when walking around.

Azhdarchids were likely the largest flying animals on Earth. The most famous member of the family is the enormous Quetzalcoatlus northropi, a creature that probably had a wingspan close to 33 feet across. The 550-pound predator was likely an able flyer, casually cruising through the sky at around 55 miles per hour. Those wings were probably saved for bigger trips though, since the animal’s specialized hips and legs, as well as fossilized tracks, all suggest that azhdarchids spent much of their time walking around on all four limbs, more like a giant stork or hornbill than a soaring falcon or pelican.

This model for azhdarchids’ ecology has been called ‘terrestrial stalking.’ These pterosaurs would fold their wingtips back, so their final digit on their hand pointed upward while their other fingers hit the ground. This positioning would be helped thanks to changes in wing proportions— shoulders and upper arms were bigger, while the wing fingers were shorter than you’d find on other pterosaurs. Long necks and heads would allow them to quickly strike downwards to eat smaller prey, and in some regions this anatomy was so robust that azhdarchids were likely the local apex predator.

This isn’t to say that azhdarchids were somehow giving up on flight though. One of the reasons researchers are excited with the hip bones out of Alberta is that they’ll provide more details about how these large pterosaurs could launch themselves into the air. Strong legs would have helped for stalking the land, but it’s been calculated that quick, anaerobic movement in those leg muscles would have allowed azhdarchids to basically leap into flight in a single motion. By studying the muscle scarring on the new hip bone, we’re getting a better picture of the balance between launching and walking, er, stalking.