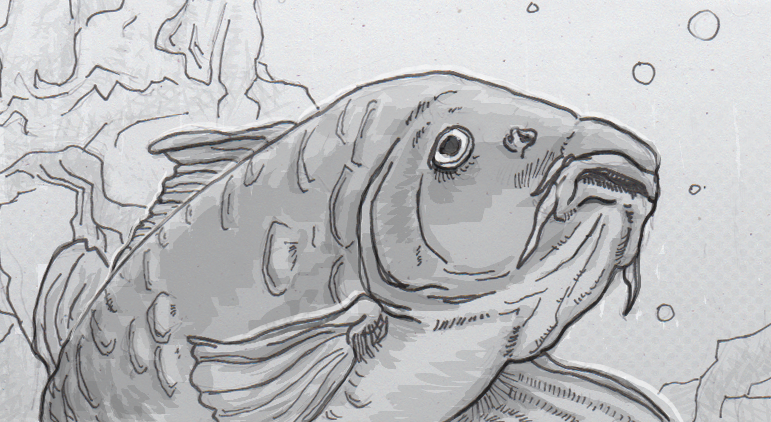 Evolution is a slow, incremental process that takes place over generations. Small changes in individuals’ genes might make improvements in their life and reproductive chances, possibly being passed down to their offspring for further advantage. Most of the time, these changes are too small and gradual for us to notice, only proving their value over generations. Unless there’s no time for all that, in which case things can change in a hurry.

Mirrored carp (Cyprinus carpio) are the product of human intervention, rather than natural selection. They’re noted for their patches of shiny scales, but also for how few scales they have on their bodies. This is because European monks found some carp with a mutation that caused them to grow fewer scales, which made the fish more convenient to prepare for dinner. After selectively breeding these carp, the mutation became common enough to more or less sustain itself.

However, once some mirrored carp where released in Madagascar in the 1912, that mutation was no longer providing any advantage to the fish. Without monks overseeing their breeding, lacking scales seemed to be a problem, as the fish were found to be growing scales more densely again by the 1950s. Importantly, the new scales weren’t due to a strict reversal of human breeding, but actually a new genetic mechanism to grow more scales. A different gene had mutated along the way, and within just a few decades proven to be useful enough to begin dominating the gene pool.

Tasmanian devils (Sarcophilus harrisii) seem to be in the midst of updating their genes right now, and without a moment to spare. The small, carnivorous marsupials are dealing with an outbreak of contagious cancer. The disease is transmitted through saliva when the animals fight and bite each other, and their meager population has been considered at great risk of extinction as a result.

However, around ten percent of the exposed animals don’t succumb to the disease, and two specific genes seem to be the keys to their success. What’s more, widespread genetic tests indicate that those genes are being quickly propagated through the Tasmanian devil population. Combined with other, more traditional conservation efforts, these changes in the species genome may just arrive fast enough to save them from disaster.

Source: Carp undergo ‘reverse evolution’ to get their scales back by Ben Panko, Science Magazine