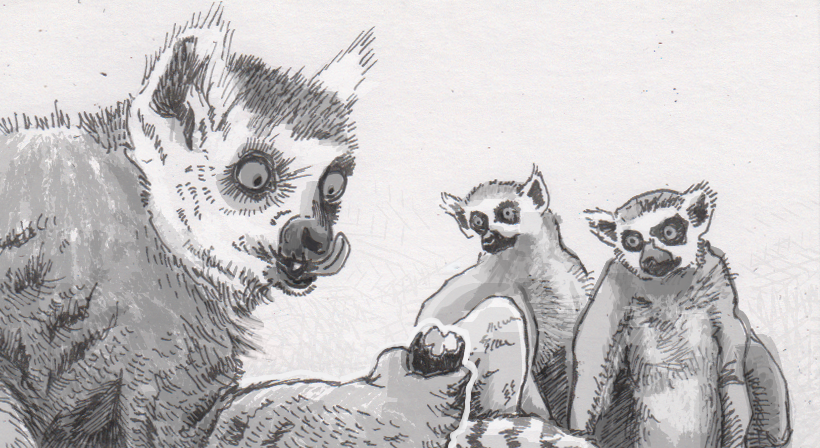 Despite stereotypes about the unpopularity of nerds, primates seem to find learning fairly attractive. In the case of ring-tailed lemurs (Lemur catta), acquiring a single grape from a puzzling, Plexiglas drawer proved to be enough to greatly improve an individual’s social status, even if that individual didn’t change any of its behavior after the fact. This not only suggests a mechanism to incentivize learning and exploration in social animals, but also adds a layer of complexity to primate relationships that haven’t been previously considered.

The task itself was fairly straightforward. A Plexiglas box containing a single grape was placed in an enclosure with a group of lemurs. In most cases, a younger individual was the first to play with the box enough to open a drawer and win their prize, kicking of a cascade of responses from nearby witnesses. Some tried to apply the newfound knowledge directly, going to investigate the box themselves. Others began to flock to the successful individual, providing “affiliative behaviors” like grooming well beyond what that lemur ever received before getting the grape. Further visits to the box only boosted that lemur’s status, as their peers apparently loved the idea of their newfound friend’s mastery of the puzzle.

Gratification without the grape

Unlike previous experiments in this vein, researchers carefully designed this experiment to only provide a direct reward to the animal that opened the box. Previous studies rewarded curious individuals with enough food to potentially share, raising the possibility that a lemur’s new fans were only interested in getting a bite to eat themselves. By limiting the reward to a single grape, this study made it clear that the social group saw some other value in their new relationship. What’s more, the doting lemurs didn’t receive any reciprocal grooming or care from the successful individual either, suggesting that solving the initial puzzle was somehow valuable beyond immediate gratification.

One possible explanation is that friendships with successful individuals may yield benefits later on. While there was only one grape today, a lemur might feel like it’s good to be friends a clever peer in case they turn up with more grapes tomorrow. While this may sound rather subservient, these lemurs were likely learning from their new friend’s success as well. Lemurs that started spending a lot of time with a puzzle-solving individual were more likely to be successful with puzzle boxes in the future. They liked their hero’s mastery, but they also made a point to learn from it as well. It shows how learing and social status may be intertwined in social primates, and how the give and take in these relationships may not be obvious at first glance, especially if the prized grape has already been eaten.

Source: Lessons from lemurs: To make friends, show off your smarts by Princeton University, Science Daily