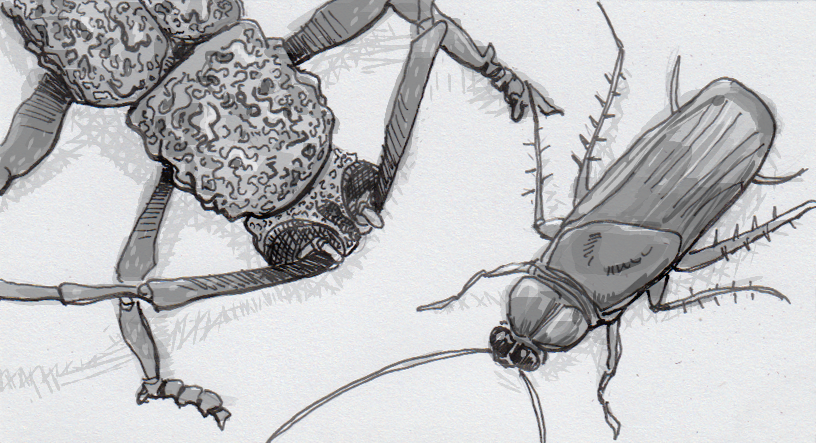 Insects seem to be moving in on our turf. No, I’m not talking about a kitchen full of ants, but some of the core tenants of who we are. Some bugs aren’t staying on their side of the biological fence, and are not only taking a shot at live births, but also at mammalia’s strongest claim to fame, producing milk for our young. They don’t seem to have the full recipe for lactose figured out yet, but it looks like they’re producing some considerable nutrition that even a buffalo would be jealous of.

These intrusions have actually been going on for a while. A handful of beetle species have been found to be ovoviviparous parents, meaning they give birth to live young, sort of like we do. The latest example to be uncovered is the flightless long-horn beetle Dolichostyrax aurivillius, which had been generally overlooked in its native Borneo. Recent studies found that, like a few other, loosely related species, the female beetles carry their unborn offspring until birth, rather than laying eggs and moving on. The critical difference in these reproductive strategies is that these moms are not employing a uterus and placenta to grow their young, but are actually carrying their eggs internally until they hatch. Beetles aren’t the only creature to turn themselves into a mobile nest, with sharks being one of the more famous examples due to cases of unborn siblings cannibalizing each other.

Treading even closer to home is the cockroach Diploptera punctate. The widespread roach also gives birth to live young, but then goes a step further by caring for the babies after they’re born. They don’t have a full set of mammary glands to nurse with, but they produce a secretion that more than makes up for lacking what we would recognize as milk. That secretion has been found to carry a nutrition dense protein crystal that slowly gets digested by the baby cockroaches, releasing a steady but considerable flow of calories, proteins, fats and sugars.

With amino acids and more energy density than any mammal can brew for its young, researchers are looking into ways to produce these crystals without the need for more roaches. As a matter of efficiency, people have now sequenced the cockroach crystals and are looking to engineer yeast that can produce it without the need to figure out how to ‘milk’ insects. If successful, this could become a very potent dietary supplement, particularly for people without stable sources of nutrition. It may actually be too rich to make a regular part of your average diet though, so we probably won’t be putting it into our baby bottles any time soon.

Source: Scientists think cockroach milk could be the superfood of the future by Jacinta Bowler, Science Alert