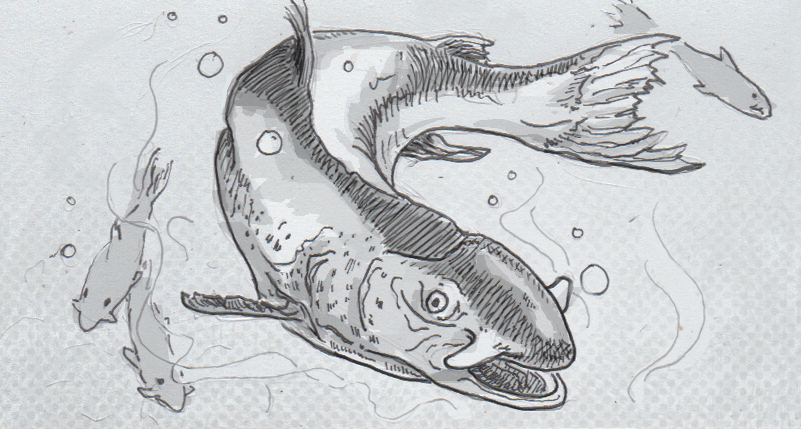 Paleontology, like all sciences, has had its share of revisions and corrections over the years, most famously starting with Iguanodon having its thumbs placed on its nose in early reconstructions. So to hear that an ancient salmon suspected of having fangs like a saber-tooth tiger has been reconfigured a bit wouldn’t be much of a surprise, until you find that researchers are sort of doubling down on the weird placement, only correcting the orientation. Instead of weird fangs, this strange fish apparently had weirder tusks.

The fish, Oncorhynchus rastrosus, lived in the Miocene era near what is now Oregon. It grew from six to twelve feet long, weighing close to 400 pounds. The aforementioned tusks were around the size of an adult’s thumb, but had previously been found detached from the skulls they were found with. Two recent, five-million-year-old specimens have corrected the record though, with their tusks still attached, jutting out sideways from the upper lip, repainting our image of the prehistoric fish.

No teeth? No problem

Despite loosing the teeth that earned the nickname “saber-toothed salmon,” this clarification of anatomy doesn’t really change what we think the fish ate. O. rastrosus also had gill rakers, which are filament covered structures made of bone or cartilage near the fish’s gills. They act a bit like a whale’s baleen, capturing plankton for the fish to ingest while water filters past, meaning even saber-teeth wouldn’t have been used for catching food. Tusks, in comparison, might actually be a bit more versatile and useful for an animal that didn’t need to be biting into meat. Their use may have been for defense, or possibly to scrape and shape the the bottom of the streams the salmon traversed to spawn.