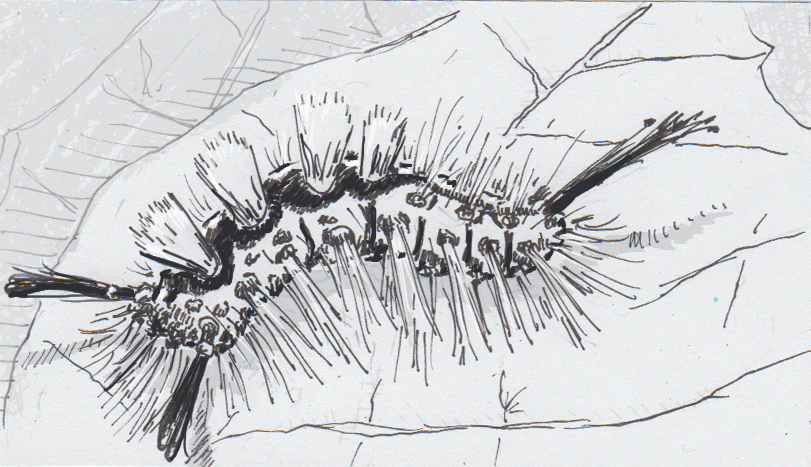 Invasion of the flamboyant caterpillars

Our neighborhood is currently in the midst of a dramatic hatching season for Orgyia vetusta, or the Western Tussock Moth. As they’ve just been hatching, we’re seeing tons of the larvae on, near, or falling out of every oak tree around. But what are these striking caterpillars, and what are they up to?

Even if you don’t live in the western United States or Canada, there’s a good chance you’ve encountered a similar caterpillar at some point, as the Lymantriinae sub-family of moths are fairly ubiquitous around the world. There are over 2,500 known species in this family, and they all have a number of distinctive traits, starting with the caterpillars’ hair.

In addition to the white tufts of hair on the caterpillars’ back that earned the name “Tussock,” members of the Lymantriinae family also grow urticating hairs. Urticating, coming from the Greek word for Stinging Nettle, describe special hairs that are designed to break off and stick to pursuers’ skin, causing irritation. The Western Tussock larvae hairs may cause allergic reactions in the skin or more serious complications if inhaled, but they are not enough to hold back every predator, such as wasps, assassin bugs, lacewings and some birds.

The adult Tussock moths also have some distinguishing traits, although none as spectacular as the larvae. The moths are sexually dimorphic, with female moths being unable to fly as they have no wings. Neither the male or female eat, as all their life’s calories are ravenously consumed as a larvae (which helped earn the sub-family name meaning “defiler,” as well as a pest designation from agriculture circles.)

Eating themselves out of house and home 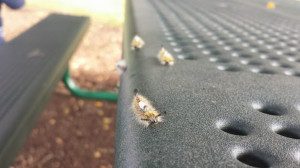 So do the oak trees around town stand a chance? It depends on the health of the tree and concentration of the spring’s hatch. As the caterpillars hatch, they begin to eat the tree they were born in. If it’s a particularly “big” year for Tussocks, they’ll move out of their overcrowded tree by crawling down the trunk, lowering themselves down to the ground with a line of silk, or as I’ve experienced first hand, just dropping out of the leaves above your head. In theory, they then crawl to a less occupied space before making their hairy cocoons on their way to adulthood. Until then, our local picnic tables seem to keep them plenty busy.