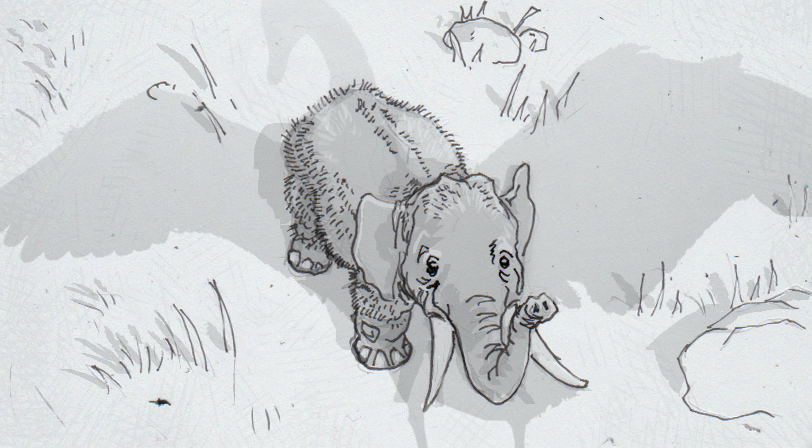 Island-hopping made for some itty-bitty elephants (and big birds)

In The Odyssey, Odysseus’ journey home is marked by stop on various islands in the Mediterranean Sea, each populated by fantastic and unique creatures. While nobody is expecting to find sirens any time soon, the story of the cyclops may hint at some of the amazing fauna that actually lived on those islands once upon a time, namely a variety of elephants from the Pleistocene epoch. The nasal cavity from the elephants’ trunks could have been interpreted as an eye socket, and with no elephants in the area for comparison, there’s little reason to expect the Ancient Greeks to understand finding such a skull. In fact, the amount of variation in some of these animals might confuse even a modern observer.

The world’s climate during the Pleistocene was fairly fickle, warming and cooling in a series of short ice ages. This meant that areas often impassible occasionally opened to migrating animals, allowing some species, like the Palaeoloxodon falconeri to emigrate from Asia to Europe. Once there, changes in sea levels opened temporary passage to islands, where populations could become isolated, growing apart from their mainland kin to adapt to their new, discreet territories. This kind of adaptation called the “island rule,” where pressures on a species are suddenly added, like less food and space, or removed, such as when predators don’t relocate as well. Island environments then act as catalysts for dramatic change, which for P. falconeri meant shrinking.

Each island Paleoloxodon has been found on in the Mediterranean seemed to have a slightly different effect on their morphology, but Sicily stands out as an extreme. Thanks to a limited amount of food and space, the elephants there grew no more than three feet tall. Their proportions were different from most larger elephants, with longer backs, shorter legs and larger heads, similar to other dwarfed species. Since their bodies were so reduced in volume, Sicilian P. falconeri likely had concerns with heat retention, and may have grown a thicker layer of hair than their larger cousins who could rely on their mass alone to stay warm. They also may have had smaller ears, again to reduce surface area, but their more infantile proportions may have left them with relatively larger brains.

Sicily was not a Mediterranean Lilliput though. Many smaller species found the environment to be unexceptional. Others, like the swan Cynus falconeri, found that an island with no natural predators allowed them to really spread their wings, figuratively and literally. Compared to living swans (and the aforementioned elephants,) C. faconeri were giants, growing over six feet from nose to tail with a wingspan up to 10 feet across. While they weighed less than the 600 pound elephants, these birds may have still weighed too much to actually fly, which was probably a blessing to any animals living on the Mediterranean’s other islands.

In addition to giant swans and dwarf elephants, fossils of miniature hippos, deer and dogs have been found as further evidence of island-specific ecosystems. In the end, it’s likely that further shifts in the European climate may have been too much for these unusual creatures to handle, wiping them out across the continent. Unfortunately, its not clear if Odysseus ever encountered a beast inspired by the beak of a six-foot swan though.

My first grader said: Too bad they’re extinct— I want a little elephant as a pet!

My wife said: Me too!