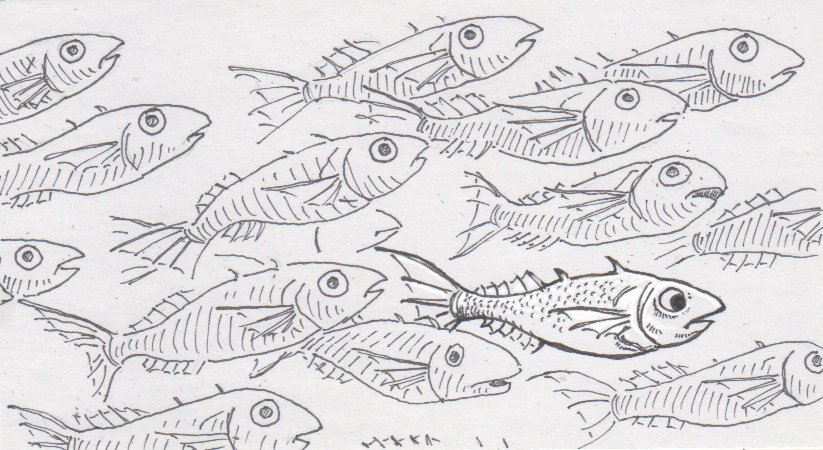 Isolating the impact of individual personalities on fish schooling performance

Anyone who’s worked on a group project has probably enjoyed the… complexities, shall we say, of trying to coordinate with people who aren’t in sync with the team. They’re not on the same page as everyone else, and don’t seem to care much either. When writing a report, this can feel very disruptive, but it looks like this kind of behavior may be helpful in some situations, like when a school of fish is hunting for food.

Sticking too close together

Researchers defined a few personality traits they thought might affect schooling behavior in stickleback fish. These included things like how closely one fish would want to sync its speed to its neighbor, or how often they would swim stray from the group. Once fish were sorted by these traits, they were allowed to explore an environment in more homogeneous groups, such as a group of fish that all prioritized social cohesion and synchronization.

It turned out that when every fish was prone to stick together, the school was unsurprisingly cohesive, but at a cost. With every fish happily doing their best to stay in the middle of the group, they barely went anywhere. Beyond that, they stuck together, but weren’t actually well coordinated in doing so, possibly because each individual was more interested in following each other than moving in a single direction. The test environment was seeded with food for the fish to discover, and schools composed of highly-cohesive fish simply weren’t as efficient at finding anything to eat. Schooling also provides protection from predators picking a single target to prey on, but checking on how safe this slow-moving school was wasn’t part of the experiment.

Building on these tests, researchers also ran simulations of schools composed of different personality types. They found that the introduction of a few fish that are less interested in sticking with their neighbors actually reshaped the whole group for the better. Even a couple of fish that were simply swimming a bit faster than a neighbor helped make the school more coordinated, probably by providing a course for slower swimmers to follow.

It’s probably too early to call the behavior of the faster, more exploratory fish leadership, since that would imply a lot of intent that this research wasn’t testing. However, it also shows how intent may not be strictly necessary, and that even minor variations in behavior can make a big difference in the school’s outcomes. This might not make your next group project easier, but it will likely inform our understanding of group dynamics as a whole, from flocking birds to the designs of swarming robots.