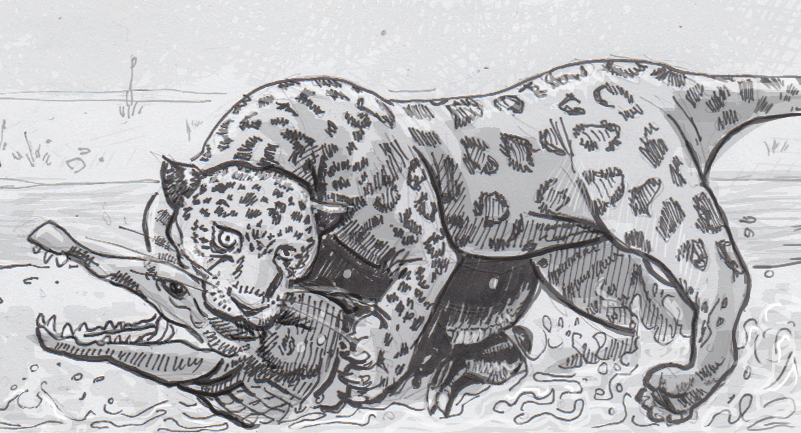 Jaguars strong jaws make quick work of most of the jungle

Can you spot the difference between a jaguar and a leopard? They’re both large cats that hunt by stalking prey. Jaguars are more likely to have spots inside the rosette patterning on their back, but both species can occasionally be entirely black as well. Both animals are adepts swimmers in their respective jungle habitats. From preys’ perspective, the main difference that really counts is the bulk of each cat’s jaws, and how that shapes their attack patterns— a leopard, like most cats, is likely to attack your throat, while a jaguar breaks the mold a bit and goes after your spine.

In general, jaguars (Panthera onca) are slightly stockier than leopards, with a definite shift in proportions in the skull. Jaguars’ larger head and jaws allow for more muscle attachment for a stronger bite, further complimented by thicker canine teeth. For a long time, biologists assumed that this was an adaptation to break through thicker shells or hides on reptilian prey, like turtles. This is at least partially true, since a jaguar will make a meal out of a turtle or even an armadillo, but the added bite force actually allows the cats to expand their menus well beyond slow, armored animals.

The crushing power of a jaguar’s jaws allow it to hunt very differently from the aforementioned leopards, or even lions and tigers. Those cats aim for their prey’s throats during a hunt, hoping to pull their target down while holding and piercing the neck. The cat then wins the kill by crushing the windpipe waiting for their prey to bleed to death. Since a jaguar’s bite is strong enough to pierce bony structures, they don’t have to draw things out so long, and will aim for an animal’s spine or skull, killing or at least incapacitating their target immediately.

Everything can be food if you’re fast

Speed counts for a lot, since a single, debilitating strike allows a jaguar to end what would otherwise be a dangerous match-up with their potential-meals. By killing quickly, jaguars can go after anacondas or social animals like peccaries. Taking on a herd of peccaries would be a risk if the jaguar would have to hold down it’s target while being assaulted by the rest of the heard, but a quick kill can be retrieved later, once the rest of the herd has run away.

These tactics can even come around to prove some of the early theories about jaguar hunting correct. A properly motivated jaguar will sometimes take on a caiman, which is not only a large, dangerous crocodilian, but also a fairly armored reptile thanks the osteoderms along its back. If the jaguar can get the upper hand though, it’s jaws can take care of the rest.

My mother-in-law asked: Did jaguar jaws really adapt to this set of prey, or did they just retain the jaws of sabertooth tigers?

There may have been some convergent evolution happening at some point in the past, but as far as we know, sabertooth cats have no living descendants today. We’re not entirely sure about how those cats hunted, but there’s evidence they hunted in groups, more like modern lions. Those famous teeth probably weren’t used for crunching spines and skulls like a jaguar either, with some researchers suggesting that they were more like piercing weapons to stab into soft tissue.

Source: For jaguars, armored prey is no obstacle by Sarah Zielinski, Wild Things