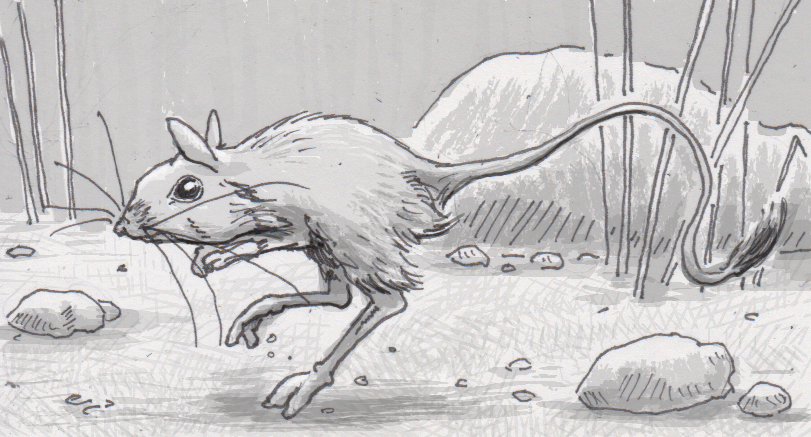 Jerboas rely on two long legs to hop, skip and jump out of harm’s way

Jerboas are small, herbivorous rodents native to Asian deserts. Like many other fuzzy critters their size, their life is spent trying to find a balance between finding food and finding shelter, particularly from airborne predators like owls. A key difference between jerboas and their kin is that these rodents run around primarily on their hind legs, and researchers believe that their bipedal movement is what allows them to more safely explore the world.

To be objective about how hopping about on two legs makes a difference to the jerboa, researchers first had to figure out how to quantify their movement. The type of steps they take, or the gait, was categorized as either hopping, skipping or running. Those categories still left a lot to the imagination, so researchers had to also find a way to measure how fast the jerboas traveled, how often they changed speeds, and what direction this movement took place in. Since hopping and jumping were part of the jerboa’s evasive maneuvers, the traditional treadmills that are often used to measure an animal’s speed weren’t sufficient. To capture the full range of motion, the six-inch rodents were tracked in a special enclosure, complete with simulated raptor attacks.

Once specific attributes about the jerboa’s gaits were analyzed, it became clear that their movement simply much more randomized than their quadruped peers. Rather than avoiding danger by running faster, jerboas leveraged their bipedal flexibility to change speeds, hop, and more in a way that made their paths very unpredictable. For the flying predators the jerboas are most concerned about, this would be very difficult to compensate for when diving out of the air in a straight line.

Researchers also found that on some level, the jerboas were aware of their relative safety. Jirds, a gerbil-like rodent native to Asia, were observed in a similar space as a quadrupedal control group, and they demonstrated much stronger thigmotaxis, or desire to remain in contact with sheltering objects. The jirds explored their enclosures, but always kept close to the walls, presumably to feel less exposed to danger. The jerboas seemed much happier to explore the entire space, in the process gaining access to more potential food sources. In addition to getting access to new food sources, the jerboas would also be competing less with their four-legged brethren who stay under cover, essentially helping both species in the process.