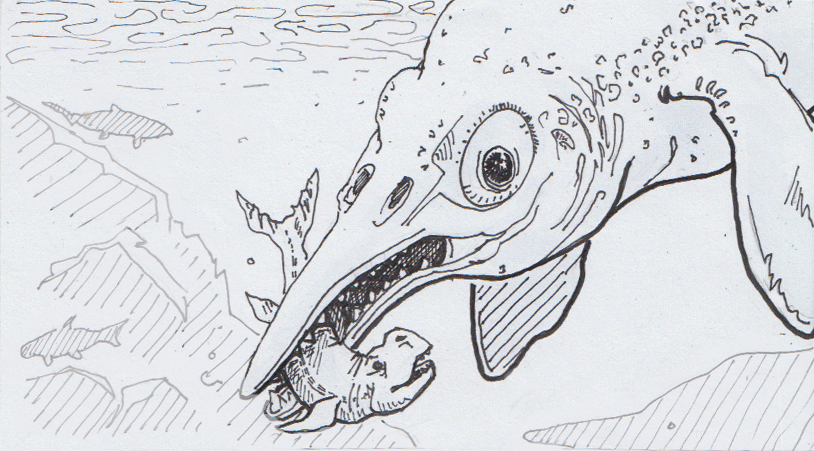 Just How Similar is a Dolphin to an Icthyosaur?

Icthyosaurs and dolphins were separated by 200 million years, and yet they bear a lot of resemblance to each other. Fin layout, head-shape, etc. all more or less line up, even though one did not evolve from the other. Instead, they’re a great example of convergent evolution, where different lineages have come back to the same basic ‘solutions’ to the challenges of the shared environment.

In this case we have two families of animals that came back to the ocean after having ancestors that lived on land. As such, they have fins that show their origins as hands and feet (yes, that were fins long before that, but that’s not my point here.) In the case of the icthyosaur, they still have four limbs, while dolphins (and whales) have given their rear limbs up.

But even more striking than the fins are how similar dolphin mouths look to an icthyosaur. This was the focus of a recent study by Neil Kelley and Ryosuke Motani, where they carefully went through an assortment of living sea creatures and compared skull and mouth structures, so that when we say “they’re similar” we actually have some useful metrics to refer to.

The mouths broke down into 3 main groups. The first was thick, square, plant-eaters and chewers, like a green sea turtle. The main goal here is to chew and grind tough food. On the opposite end of the spectrum is the thin, pointed mouths like a swordfish, dolphin or icthyosaur. These mouths are made for quick “snap feeding” on fast moving prey. The last group is somewhere in between, found on apex predators like an orca. The jaws have plenty of muscle for biting and importantly, tearing off pieces of bigger prey.

So with this framework, it’s now easier to make comparisons and further guesses about how an animal like an icthyosaur hunted since we can closely compare it to modern snap-feeding colleagues like a bottlenose dolphin.

Source: Why an Ichthyosaur Looks Like a Dolphin by Brian Switek, Laelaps