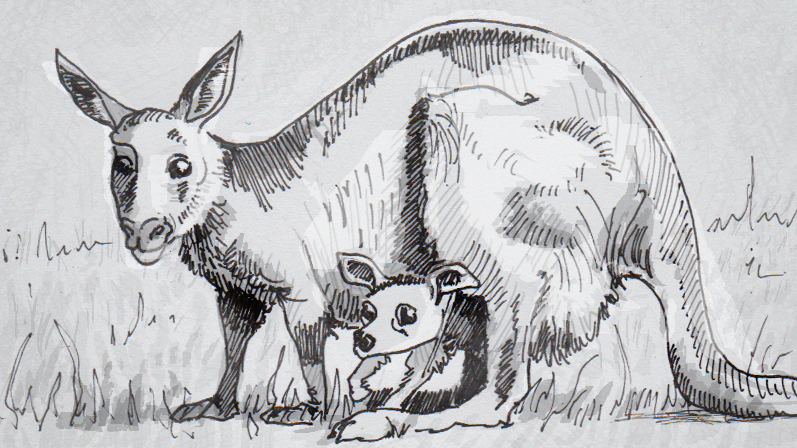 Kangaroos and the possible benefits of raising other mothers’ babies

Kangaroos, as marsupials, give birth live young that immediately travel to their mother’s pouch to complete their gestation. They spend up to a year nursing and growing, even after they’re large enough to climb in and out of the pouch. An intimate relationship like this would presumably be quite personal, and so researchers were quite puzzled when it was observed that some babies, or joeys, were eventually being adopted and raised in other mothers’ pouches. Considering the time and resources needed to see an animals’ own lineage continue in the form of their offspring, why would these mothers make such a switch?

The first hypothesis was that there was a sort of compromise happening. Maybe the adopted babies were all relatives, and so raising them was the next best way to see your DNA continue, after your own offspring. The second hypothesis was that the adoptive mothers may be trainees. Maybe by practicing with toddler-sized joeys, the adoptive kangaroos would gain some experience, making them better at parenting when they had their own babies. Once the data was examined, however, both hypotheses started to fall apart.

The data was gathered after 615 kangaroos were tagged so that they could be tracked. After five years of observation, three percent of the 326 joeys were found to be living under the care of an adoptive mother. The pattern in those adoptions, however, was that there basically was no pattern. There seemed to be no preference for adopting close relations to the mother kangaroo. Only one of the adoptive mothers could be considered a trainee, with most having a baby already. So what could be the explanation for this behavior?

The answer, unsatisfyingly, may be that there really isn’t an advantage, at least on an individual level. It was noted that adoptions were more likely to occur in dense kangaroo populations, and often after moments of stress or panic. At these times, kangaroo mothers seemed to grab whatever joey was closest before fleeing the scene. Most of the time this would be their own offspring, but sometimes a switch, or even a direct trade with another mother, would be made in the chaos, even to the point where and adoptive mother would end up leaving her own joey to be abandoned. Kangaroos identify their babies by scent, but by the time they would check the joey in their pouch, that joey was already being marked by the mother’s body, and thus could pass the sniff test.

It seems that this was a case of a behavior that did not evolve to be maximally optimized, but rather that it’s good enough. As adopted babies continued to grow up and reproduce, there was no real pressure to keep these families together. It may not be a great system for individual bloodlines trying to further their own genes, but it’s good enough for the species as a whole.

My kindergartner asked: My mommy would never confuse me, right? Aside from some early baby photos where she looks a lot like her younger brother, I don’t think we’d admit to ever confusing her identity. A more apt comparison may be how human babies learn their mother’s scent, using it to recognize and bond with her from their first day, especially when nursing.

Source: The Mystery of Kangaroo Adoptions by Carl Zimmer, The Loom