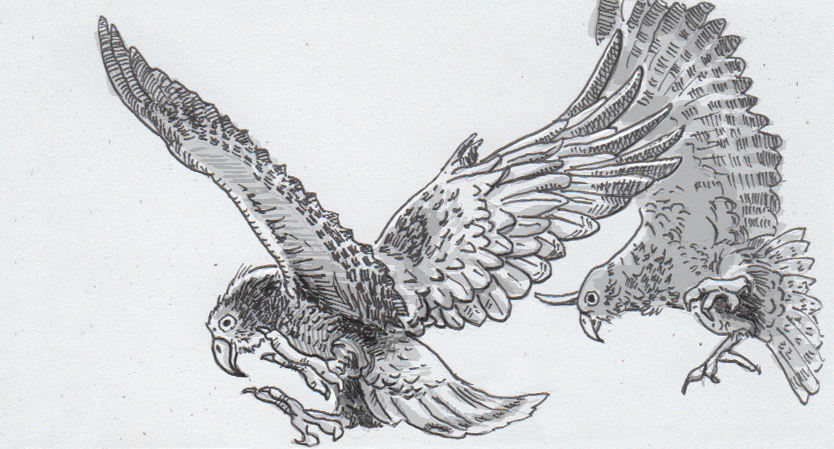 Kea parrots can call and coordinate bouts of cooperative play

Richard Bach’s Jonathan Livingston seagull would have been much happier as a kea parrot. At the very least, he may have been more persuasive when confronting gulls that “don’t bother to learn more than the simplest facts of flight” if he’d adopted some of the parrots’ recruiting tactics, like calling to each other to initiate some happy-go-lucky playtime. These colorful natives of New Zealand seem to really enjoy exploring their capabilities in the air, and on the ground, and with each other. They may not provide the drama necessary for Bach’s fictional seagull, but these parrots make a point to explore and share the journey with their flocks.

Kea parrots (Nestor notabilis) don’t have many native predators, which may have helped free up their time to relax and have a bit of fun with their day. Researchers have noted how curious they are about new stimuli, happily approaching humans, cars and anything else that might catch their interest. Captive birds are equally inquisitive, digging into logic puzzles with energy and persistence.

When there’s not something new to play with, the green and orange parrots will play with each other. Playtime can range from what appear to be areal races and attempts at aeronautics to friendly wrestling matches or even throwing rocks in a game of catch. These activities can take place between males and females, adults and young, without any sense of demographic boundaries. Researchers believe that the play actually helps reinforce a flock’s sense of friendly camaraderie, as actual conflict between keas has never been directly observed. However, parrots that play together are may then more likely to be even nicer to each other, doing things like sharing food with playmates.

With playtime possibly being so closely tied to this intra-species diplomacy, it makes sense that kea parrots have a special call to initiate play. It functions almost like a reverse alarm call, since rather than triggering mass fear responses to avoid a predator, it seems to trigger mass play responses in nearby birds. Play may not take place with the particular bird that made the call, as any parrot that heard the call will suddenly start improvising some kind of play with whoever they’re next to at the time. After a few minutes, the play can abruptly stop, as if the song for the impromptu dance-party ended and everyone had to get back to work.

Researchers are interested in exploring these lines between triggered behaviors and deeper, possibly more persistent changes in emotion or mood. Do the laughter-like play calls induce playtime like a binary trigger, or are the birds suddenly so elated that play just seems like the best way to harness that energy? It’s a tricky question, made harder by the kea parrot’s dwindling populations that face invasive predators, habitat loss and accidental poisoning in traps, but hopefully some of their joyous, cooperative behavior can rub off on humans in time for us to figure out some ways to keep the birds safe.

Source: The Parrot With a Call as Infectious as Laughter by Ed Yong, The Atlantic