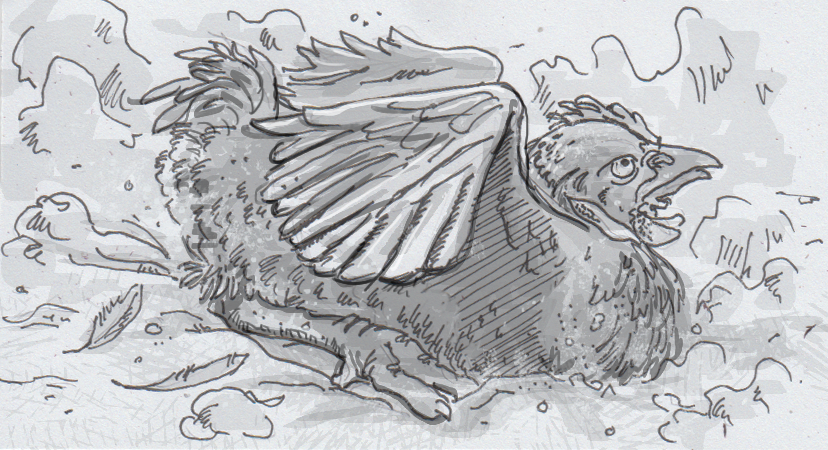 We often think of getting dirty as a way to pick up more bugs, but chickens would beg to differ. Like many birds, chickens have an instinct to engage in dust baths on a daily basis, where they scratch, dig and toss dirt all over themselves, almost like a kid playing in bubble-bath. Finer dirt, particularly diatomaceous earth made from fossilized algae, seems preferable to coarser options like wood chips, and after a nice soak in the dust, chickens usually shake themselves “dry,” and are reported to smell all the nicer for it. While this may sound like a water-saving innovation humans should look into, it probably wouldn’t help us out unless we’re specifically looking to dislodge parasites like mites from our feathers, er, skin.

While the chickens probably don’t fully comprehend what the dust is doing for them, they’ve evolved this behavior for good reason. It’s thought that some larger insects might get pried loose during a dust bath, or have breathing pores clogged if the sediment is fine enough. However, the effect on tiny mites has been documented to be as effective as pesticides (without concerns about toxicity.) The dust actually cracks the mites exoskeleton, causing them to dry out and die. The dirt can even have a preventative effect, keeping mite infections to a minimum for as long as the chickens had access to their daily soil scrub.

Aside from satisfying the chickens’ apparent desire to have a nice bath on a regular basis, keeping mites off of birds has benefits for people too. Chickens battling blood-sucking mites like the red poultry mite (Dermanyssus gallinae) have been found to produce two to four percent fewer eggs. This often leads farmers to consider pesticides to keep the birds out of trouble, but easy access to dirt looks like an affordable and cleaner way to deal with the problem.

Dust baths are just one of a growing number of ways that farmers are looking to natural behaviors to help reduce the use of poisons overall. Aside from self-cleaning chickens, chickens and ducks are also being employed as pesticide substitutes themselves. Using what’s called a “chicken tractor,” which is basically a portable, protective coop with a loose wire bottom, birds can be deployed around a farm to eat pest insects that would otherwise destroy crops. The birds supplement their diet in the process, and may even sneak in a bath or two if conditions are dirty enough.