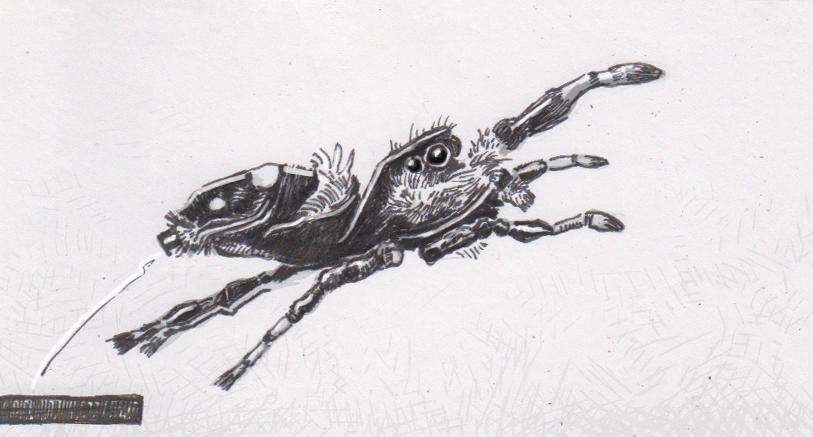 As every Mario player knows, if you want to make a short, low jump, you just tap the A button. To get across a larger gap, you need to combine a running start with holding the A button for a longer amount of time. It’s a simple enough system, and yet it’s somehow not good enough for engineers trying to build tiny jumping robots. Real world complications, like physics and efficiency, pushed them to draw inspiration from some of the world’s real masters of platforming-jumping spiders.

Regal jumping spiders (Phidippus regius) are quick, tiny arachnids that can launch themselves across relatively large gaps to find safety and hunt down prey. Spiders like a regal jumping spider actually move so quickly it’s hard to tell exactly what goes into their amazing leaps, some of which can span over five-times the spider’s body length. It’s been established that spider legs move with a mix of muscle strength and changing in body fluid pressures, but to find out more researchers needed to carefully record a spider’s movement in action.

A single spider, named Kim, was recruited to demonstrate her athletic prowess in front of a set of high-speed cameras. Kim was repeatedly prompted to jump between two adjustable platforms, almost like a gentle, tiny obstacle course. Once researchers could really see how the spider moved, they saw that Kim clearly put some thought into each jump— longer jumps were made at the most efficient angle possible, maximizing distance while minimizing effort. Shorter leaps showed an emphasis on speed, as Kim would often move in a flatter arc that would minimize distance and flight time, even if it required more of a push with her back legs to get airborne. Oddly, they also found that Kim prepped for each jump by attaching a piece of silk to the platform she was jumping off of, although researchers aren’t sure how that helped her. The silk may help provide course-correction on longer jumps, or just act as a safety harness in case the spider misses its target.

The deployed silk and distance-sensitive movements present a few challenges for engineers who would like to replicate the spiders’ jumps. While they were able to build a device that could spring across a gap, researchers concede that building in sensors, processors and other machinery to control a leap may be difficult feat in a device the size of a fingernail. They hope that some gains can be made from further study of exact mechanics of the spider’s legs. While spiders like Kim certainly use hydraulic pressure to help flex their limbs, calculations suggest that their muscles alone would be able to handle the movement observed in this study. As such, the role of the fluid pressure in each leg remains unclear. Maybe it just provides extra strength to hold the B button?

Source: Scientists train spider to jump on demand to discover secrets of animal movement by University of Manchester, Science Daily