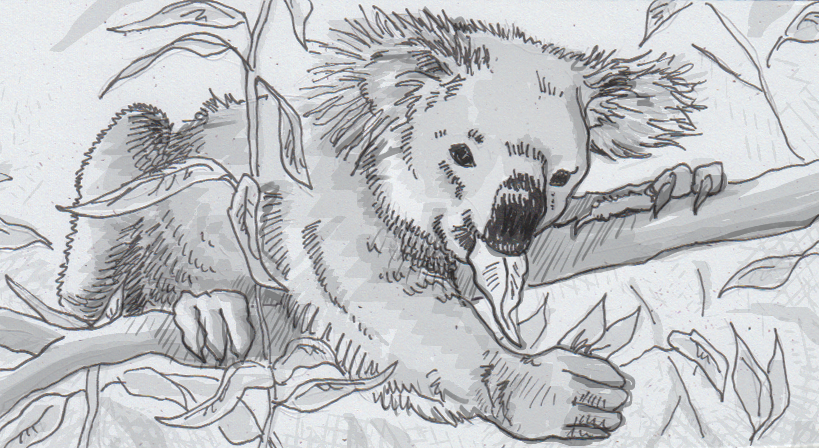 Part of the charm of a koala is how calm and gentle they seem. The herbivorous marsupials can partially get away with their predominantly adorable appearance because they barely have to share their ecological niche, and therefore don’t need to worry much about scaring off competition. That’s not to say that their preferred menu is exactly easy to deal with, since eating eucalyptus leaves still requires some slightly unsavory specializations.

Eucalyptus leaves contain an oil called eucalyptol, which is responsible for the notable smell of eucalyptus products. Like many strong smells and flavors in plants, it is also toxic to a degree, particularly in larger doses. When combined with the low nutritional value of the leaves, makes eucalyptus fairly unattractive to most animals.

Koalas (Phascolarctos cinereus) obviously make this work, mainly thanks to some very well-prepared digestive tracts. Their first trick is to ingest the eucalyptol very slowly. They have a slow metabolic rate and a relatively long fiber-digesting organ called a cecum, which can slowly work on each leaf, making the most of each bit of food. Also critical to their digestion is the microbiota living in their guts, which helps break down food and toxins. While new joeys are born with properly proportioned cecums, they don’t have the microbiome needed to digest eucalyptus, which is where things get a little messy.

Messy may not be the right word, as seeding a joey’s gut is actually a fairly controlled process. Starting when the joey is around 22 weeks old, it will start weaning off of its mother’s milk, and preparing for life as an herbivore by eating what’s called ‘pap.’ Pap is a specialized form of feces that is loaded with beneficial bacteria. The soft, mushy substance is comparable to jarred baby food, and yet somehow sounds even less appealing than a helping of pureed Ham & Ham Gravy. The pap otherwise carries a lot of the same nutrients fresh eucalyptus, setting up the joey’s digestion for it entire post-weaning diet.