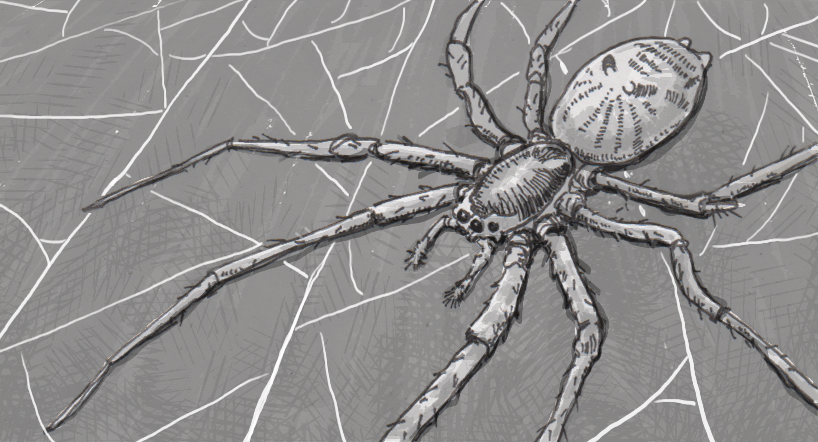 The lace sheet weaver spider (Psechrus clavis) basically does what its name describes, although that’s really only half the story. Rather than messy tangle webs or circular orb webs, the sheet weaver makes a large, flat web that is usually suspended just over the ground, usually in shadier locales. It’s an unusual arrangement, especially since this spider likes to dine on flying bugs like moths, who presumably would be easier to catch mid-flight in a vertical web. However, experiments have found that the horizontal webs have a special property to help pull moths out of the sky.

As much as a horizontal web may look like a safety net, its success at snaring moths is probably due to looking like open space. Moths don’t have the greatest eyesight, and seem to navigate in the dark by making crude judgments about the amount of open space ahead of them. Having evolved in a world without artificial lighting, open space at night is generally going to be lighter than the dark silhouettes of trees, rocks and the ground. So when a moth is flying at your porch light, it’s likely very confused why this theoretically empty space is somehow solid enough to bang into.

At some point the spiders stumbled upon this weakness in moth navigation, and can now use it against them. Their horizontal webs are notably bright and reflective, and researchers hypothesized that that white coloration looked light enough at night to convince the moths it was a safe place to fly. This was tested by covering a set of P. clavis webs in charcoal powder to make them dark black, then comparing how that new coloration affected the number of moths captured in a night. As suspected, the lighter webs caught a lot more prey, indicating that the white webs were more attractive.

The next step is to compare coloration to brightness. Some spiders make themselves, or their webs, look attractive with color for daytime hunting, but these nocturnal traps may instead be based on brightness. More tests are needed, but researchers want to now confirm if it’s the amount of light reflected, and not the specific white hue of the webs, that manages to convince moths that their final resting place is somehow a safe haven.