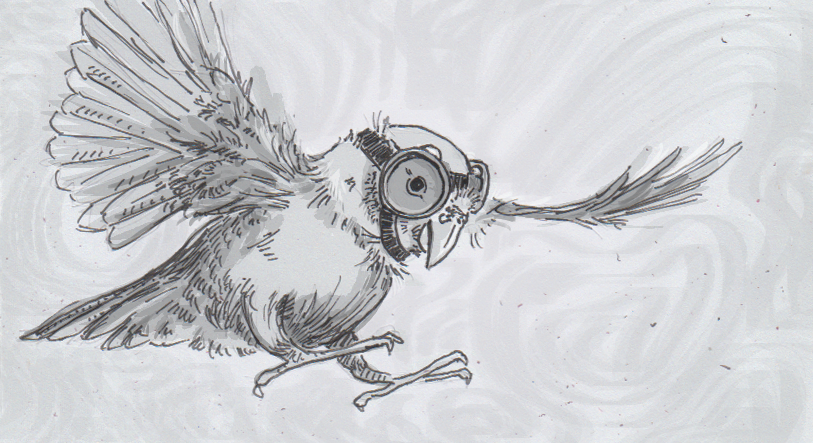 Most of the time, birds don’t need flight goggles. But then again, most of the time birds aren’t flying through swirling mist and arrays of lasers that might damage their vision. As much as this sounds like a goofy pitch for spy movie produced by Animal Planet, it’s actually some key components of a study done at Stanford University to look at the basics of how birds fly.  As mundane as that question may seem compared to its experimental setup, it turns out bird flight is more complicated than previously appreciated.

The mist and lasers weren’t actually for dramatic effect, but were instead used to let researchers see how bird wings interact with the air. The lasers were arranged in a line, illuminating the suspended droplets of mist along a single plane in the bird’s flight path. With custom, 3D-printed goggles on to protect its eyes, the bird, a parrotlet named Obi, was then recorded by high-speed cameras as he flew through the floating mist. As Obi’s wings flapped and pushed through the air, the droplets could then be seen swirling and reacting, although not exactly in a way that anyone predicted.

Violence in the vortices

The movement seen in the swirling mist, as a proxy for how air molecules normally move under a bird’s wings, was much rougher than predicted. The expectation was that as Obi’s wings flapped, they’d swirl the air into vortices that would remain behind the him for a few moments. Fixed wing aircraft also stir up the air this way, and vortices can be found thousands of meters behind the plane. While Obi’s flights did create vortices in the misty air, they didn’t prove to be very durable. After only two to three wing beats, most of the pretty swirls of air were completely blown apart.

Obi was obviously fine with all of this, having always flown and disrupted the air this way. For researchers though, this presents some significant questions. Three different models for how bird’s achieve lift when interacting with air failed to predict the observed data, which means that we don’t fully understand how feathered wings work yet. In addition to better understanding our bespeckled test subject, studies of lift will help inform designs of future flying robots, which will hopefully benefit from all the work evolution has already put into figuring out winged flight.