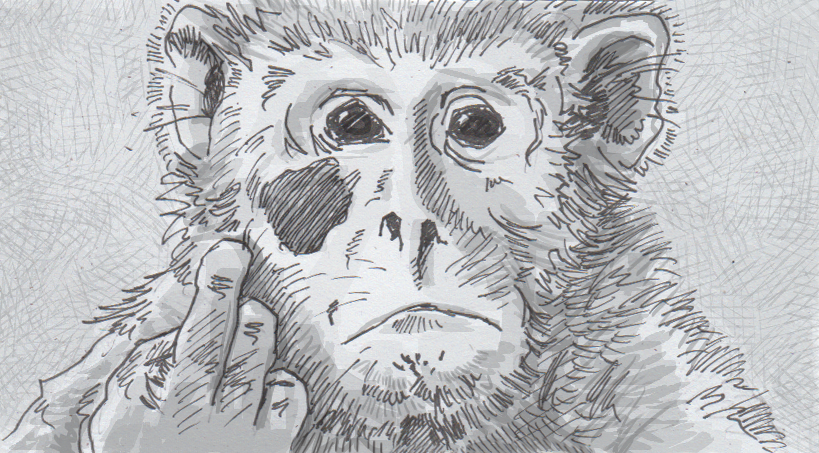 Laser pointers used to train monkeys to make use of mirrors

Deep down, there’s a chance that every creature on Earth is concerned about its appearance. Even animals like elephants, that haven’t had a good hair day in their entire lives, will ponder unexpected blemishes on their faces if they see their reflection in a mirror. The catch for many species is that they just don’t appreciate the whole concept of a mirror, much less recognizing that what they see there represents how they actually look in the outside world. For a long time, this was thought to be an inherent deficiency in animals’ cognitive abilities, but a recent study with rhesus monkeys has shown that some of this self-interest is there, but the monkeys just need to be taught to recognize what the mirror is offering.

Scientists weren’t training the rhesus monkeys (Macaca mulatta) to bring out latent narcissism, but to see how reliable mirrors were at measuring animals’ understanding of self. For decades, researchers have used what’s called a mirror self-recognition test (MSR) to see if animals had the self-awareness to recognize and appreciate their own appearance. In these tests, a small, odorless mark is put on an animal’s face or shoulder where it can only be seen by that animal using a mirror. Animals that pass the test will see the mark and move to investigate it on their own face, using the mirror as a guide, rather than assuming that the reflected image is another creature or abstraction. The fact that humans generally don’t pass the test before they’re 18 months old has tied it to a sense that it demonstrates a higher degree of perception and concept of self than most creatures seem to have.

A new sense of self?

While few species normally pass the test, success might not be as out of reach as once assumed. Rhesus monkeys normally fail to take interest in their reflections, but scientists at the Shanghai Institutes for Biological Sciences have managed to train them to pay attention. The monkeys were first trained by giving them treats for tracking the location of a laser pointer’s light as it moved to locations that were only observable via a mirror. Once this task became easy, the monkeys were given an MSR test, as well as observed in casual proximity to a mirror.

The trained monkeys passed the MSR, noting bits of pigment on their cheeks or ears. When left with a mirror, they seemed to actually be a bit infatuated with themselves, taking time to check and and adjust their hair, inspect their teeth, and also admire their genitals from as many angles as possible. For all this interest and activity, untrained monkeys showed zero interest in their mirror images, stressing the importance of the earlier training.

There’s some disagreement about what these trained monkeys prove about MSR tests. Nobody is contesting that rhesus monkeys required training to care about their mirror images, and that even the trained monkeys aren’t quite on the same level as an elephant. However, the research team is suggesting that these monkeys indicate that some of the neurological mechanisms that enable self-awareness may be wider spread, even if they’re not normally activated in many animals. The next step is to monitor the monkey’s brains as they are trained to track what circuits play a role making us care about whether or not we’re wearing makeup.