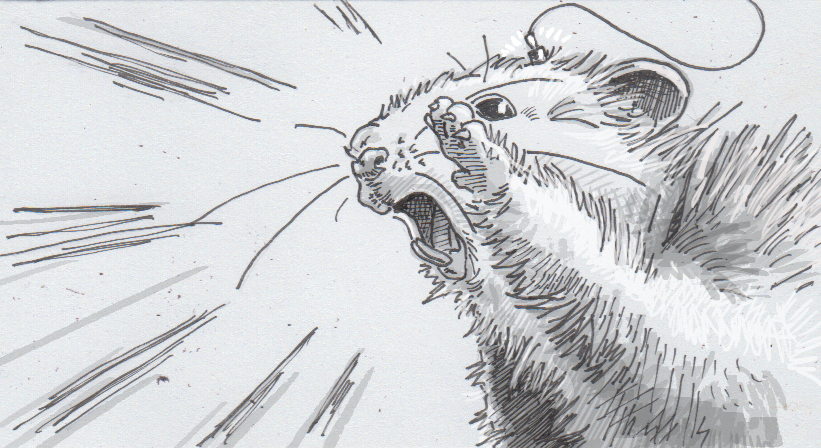 Being a predator is a complicated business, but there’s a chance that anyone can do it. Predators kill prey, but usually only after some combination of identifying, stalking, chasing, capturing and overpowering it. And then, and this is important, even if it’s obvious, they eat it. This array of activities may be familiar individually, but as a package of behaviors, aren’t completely understood, particularly in regards to how they’re handled by an animal’s brain. To poke at the mechanisms driving predatory behaviors, scientists created their own predators out of a virus, a laser and an artificially-fierce mouse.

Previous research had linked some predatory behaviors in rats to activity in their amygdala. The amygdala is a small region of the brain associated with emotional responses, such as our “fight or flight” reactions to stressful encounters. In order to experiment with the amygdala, scientists needed one they could control, so they infected a mouse’s brain with a virus that made brain cells react and activate when exposed to blue light, similar to the concepts behind optogenetics. They then used fiber optic fibers to shine light on specific brain structures, observing how they changed the mouse’s behavior in the process.

When the light was activating parts of the amygdala, the experimental mice adopted a number of predatory behavior patterns. They tensed their jaws and necks. They stalked and attacked everything from bottle caps to crickets. Even when no targets were available, the activated mice would sit and essentially mime eating some imaginary prey.

This seemed like a clear link between activity in the amygdala and predatory behaviors, but researchers wanted to confirm that they were seeing what they thought they were seeing. An alternative triggering method was tried, which yielded similar results. To ensure the mice weren’t just suddenly hungry, their food consumption was compared to normal, control mice. When no difference was found to indicate increased appetite, the hunting mice were observed around their normal peers for signs of indiscriminate aggression. The predatory mice didn’t attack other mice, indicating that their behavior was specific to a need to hunt for food, and not some sign of general aggravation.

Predation’s connection to the amygdala may mean we need to expand our assumptions about what the amygdala does in our brain. More and more behaviors are being connected to neural activity there, showing that it handles much more than just fear and flight. Even grooming has a connection to the amygdala, all of which may point to a model for the brain structure as a gate keeper for a variety of inherent, complex behaviors, rather than a simple panic button.